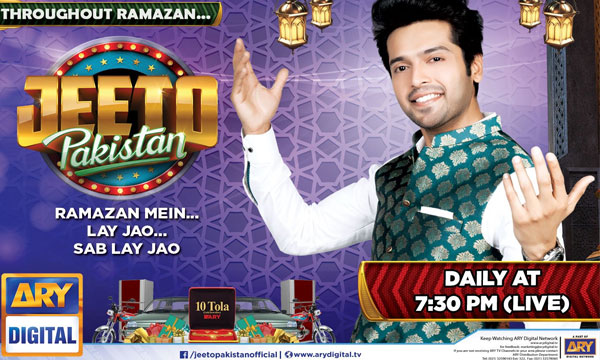 The King of game shows, Fahad Mustafa hosts the ever popular show, Jeeto Pakistan on ARY Digital which is rapidly becoming the sole source of entertainment during this holy month of Ramadan.

Among the rat race of Ramadan transmissions and game shows, Jeeto Pakistan seems to be stealing the spotlight with the highest TRP’s. What is more, even when the hottest match of the season, Pakistan Vs India could not compete with the show! Kudos to the dapper host, Fahad who brings the game show to life with his energetic performance, witty humor and unmatched style! Looks like the charisma he brings on screen is the reason people chose to watch Jeeto Pakistan over the Pak-Indo cricket match!

After the Rating for Jeeto Pakistan was shared on social media, top Pakistani celebrities applauded Fahad for this enormous feat!

We love this Twitter exchange between Sharmeen Obaid Chinoy and Fahad!

And i can bat aswell @sharmeenochinoy 😜 pic.twitter.com/AkS2YpDXKn

Ramazan Transmissions 2017 Ratings: Who is the Real Winner?