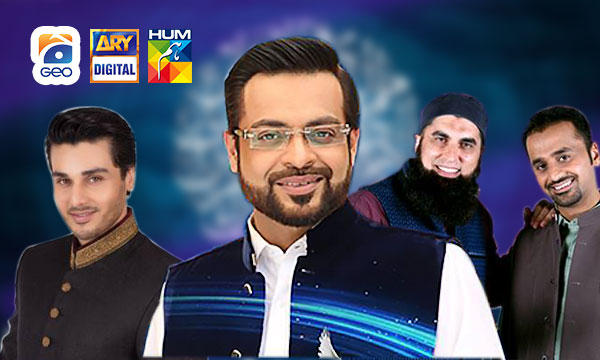 While the blessed month of spiritual rhapsody Ramadan is just days away from its farewell, the extravagant entertainment of transmissions and drama shows on our T.V sets continues in full swing!

Television networks literally leave no stone unturned to offer the ultimate heady blend of round-the-clock, top-rated holy transmissions along with exclusive 30 episode mini-drama series to keep the viewers hooked to the screens.

Eventually for the nation’s showbiz, Ramadan becomes the prime, rating-reaping season and the bitter battle of ratings between the broadcasters intensify particularly in this time of the year.

Take a look at the average rating review of the first eighteen Ramadan days of each channel. Evidently, ARY Digital stands victorious as the highest rated TV channel in the early eighteen days of the month with a mighty average TRP of 4.6. Following ARY, is GEO Entertainment with an average rating record of 4.1.

Urdu 1 lands on the third sport on the TRP toll with a relatively low figure of 1.7. Shockingly, HUM TV did not make it to the top three and achieved a mere TRP of 1.3, defeated by GEO Kahani’s rating of 1.5.

Take a look of at the complete rating breakdown of each channel featuring Sehar, Morning, Iftar, Post-Iftar and Late Night transmissions. The rundown of the Ramadan rating roll reveals that GEO Entertainment leads in Sehri with a 2.1 TRP and Iftar Transmission with a TRP of 10.5, brutally crushing down ARY Digital’s broadcast in these time slots.

Meanwhile, ARY Digital presides over other channels in the Morning round with a viewership of 1.2 and a powerful Post-Iftar rating trend of 11.5. The runner-up in the morning round is HUM TV with a 1.1 TRP, followed by GEO Kahani’s rating of 1.0.

Seemingly, the tug-of-war of ratings is the most aggressive for ARY Digital and GEO Entertainment.

While GEO’s rating magnet Aamir Liaquat appears to be the best match for the popular duo Waseem Badami & Junaid Jamshed on ARY Digital, he rightly manages to draw the most viewership  in Sehar and Iftar rounds.

Yet, he fails in the Post-Iftar series from Fahad Mustafa who not only seizes the highest ratings in this time slot from all channels via his popular Jeeto Pakistan Game show, but he also derives the largest chunk of ratings for ARY Digital in the whole day.

Consequently, the once winner-of-all GEO Entertainment is now lagging behind while ARY Digital becomes the most watched channel of the season!