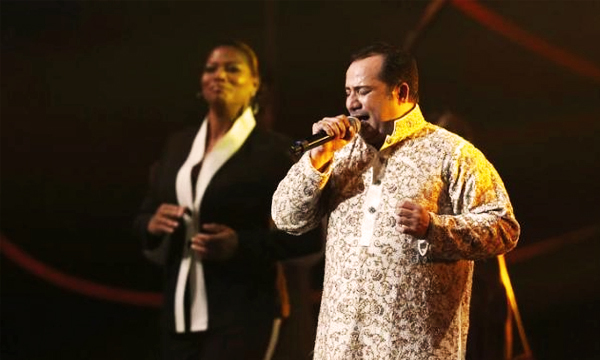 The nephew of the late Nusrat Fateh Ali Khan, Rahat Fateh Ali Khan will be performing both Sufi music and Qawaalis in his concerts this August in Britain. In his British tour, Khan will be performing his classic hits as well as his songs from the Bollywood film ‘Sultan’. Khan was also one of the performers in Nobel Peace Prize awards ceremony in 2015.

Khan also stressed upon his efforts in reviving the legacy his uncle Nusrat Fateh Ali Khan has left behind. He also said that there will be a total of  three musical segments during his concerts in Manchester, Londo, and Coventry. First will include all of his greatest hits whereas the second will be composed of unplugged versions of his songs. The third will be all about Qawaalis.

He also said that he wished to collaborate with the likes of Micheal Jackson and Whitney Houston but it’s too late now.

Rahat revealed that it has only been a decade since the classical music has become a part of the Pakistani industry whereas in India the children are encouraged from an early age to practice and learn music.

He also mentioned that his 12-year-old son, Shazman Ali Khan is learning the classical music and avidly listens to Nusrat Fateh Ali Khan. He also hinted on an international joint venture which will be disclosed in 2017. Khan said that Bollywood is an important platform where people get to listen to his soulful music and appreciate it.