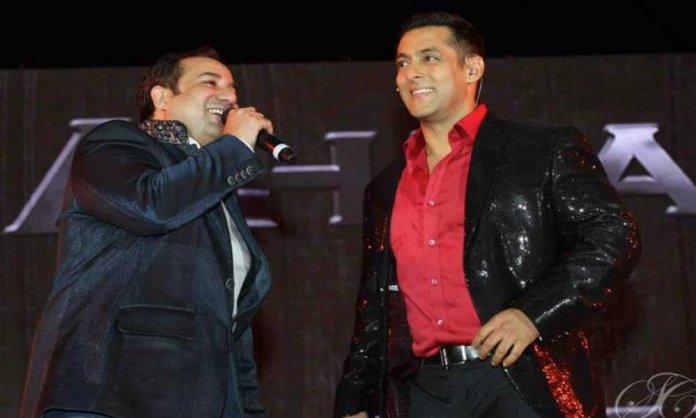 The Pakistani singer was dropped after the recording due to the increasing tension between the two countries and unofficial Pakistani artist ban in Bollywood.

The legendary singer has been replaced by famous Indian singer Javed Ali for this song specially just to avoid any troubles.

The previous two movies has iconic hits songs by Rahat featuring Salman Khan and Sonakshi Sinha. “Teray Mast Mast do Nain” in Dabang 1 and “Teray Naina Bade Dagabaaz Re” in Dabang 2 both has the soulful voice of Rahat.

One of the spokesman closer to the project claim the popularity of songs on Rahat vocals. The recording went really well and the decision was taken after the editing by the production and the Dabang star Salman Khan.

Initially Salman was the one who got the singer on board for the romantic song as per the movie’s ritual. Rahat was also the first choice of music director Sajid-Wajid and they were also really happy with the outcome of the song. But the escalating tension has forced them to drop his vocals and replace it with an Indian singer.

Though we haven’t heard anything from Rahat at the moment on this news. But we will surely going to miss his voice for the song. Earlier this year Mika Singh also came under fire in Bollywood for performing at a wedding in Karachi.

Many Indian Celebrities do condemn this cross boarder tension and this unofficial ban on Pakistani Artist but they all being cautious to avoid any backlash or controversy.

Do you guys think this artist ban is justified? Share you views in the comments below.