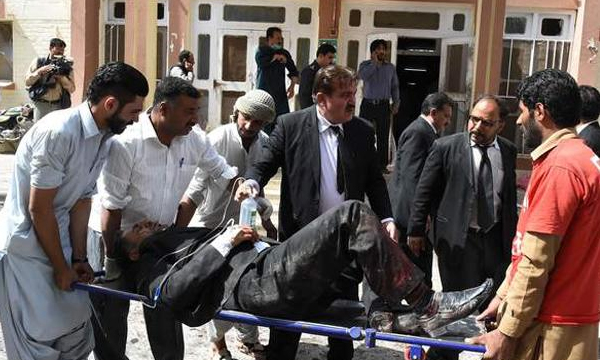 A catastrophe has struck Quetta’s Civil Hospital today as a powerful blast in the building killed 53 people and left more than 56 people injured. The blast is reported to have taken place near the emergency department of the medical center.

After the loud explosion, police officials report that unidentified men opened fire in the hospital’s vicinity after the eruption. Now, an emergency has been declared at all hospitals after the Quetta blast. It is reported that the incident occurred when a large number of lawyers and journalists had collected at Quetta’s Civil hospital after the murder of Advocate Bilal Anwar Kasi, the president of Baluchistan Bar Association. He was gunned down in an attack early morning. After the disastrous Quetta Civil Hospital blast today, social media is ablaze with fear and panic. People have expressed their condolences with the messages of support and prayers for the city on Twitter.

Read what they had to see here!

Aaj TV cameraman recites Kalima as the bomb goes off in #Quetta. May Allah grant him Jannah. pic.twitter.com/AvD3kmLyBJ

Prayers for departed souls. What a tragic incident #Quetta

This is the seriousness level of our government & the kind of security we are living with. Hence, the #Quetta blast! https://t.co/Jp3xuqBS9B

Attacking a hospital where people are already in distress! No words can describe such barbarity. #Quetta

Doomsday come to our land everyother day, #Quetta the sons of the soil killed by those who're following strategic depth since decades

There is nothing that can be said that will help heal the pain of this day. I can not look at My bit of #Quetta in the same way again.

Even during wars hospitals & ambulances aren't attacked.My fav city bleeds again.Everyday we wake up to a much more dangerous world #Quetta

Extremely sad and inhuman act in #Quetta . 93+ people dead in a terror attack.. we lost so many aims in so many lives.. 😢😢

Death toll reaches to 93! May Allah grant them jannah! My condolences for the victimised families! #Quetta #QuettaBlast

Rejoicing death of Pakistanis because they spoke against the unjust killings of Kashmiris.
How more shallow can a human being get. #Quetta

Someone having power, must take a reaponsible step for the security of the Nation, or else we have lost everything including freedom😟#Quetta

While Balochistan is celebrating #14Aug with an unparallel fervour, this is only an attempt to sabotage. Enemies won't succeed! #Quetta

My heart goes out with the families of the martyrs and injureds, I can't stop my tears… my beloved Pak SarZameen bleeds yet again #Quetta

Just when you think there is some sense of stability or peace, disaster hits. It just won't stop. #Quetta

Terrorists continue to show nothing is sacred for them…mosques, churches, schools, hospitals and least of all human lives. #Quetta

Sick and merciless to bomb a hospital, all thoughts with Quetta today