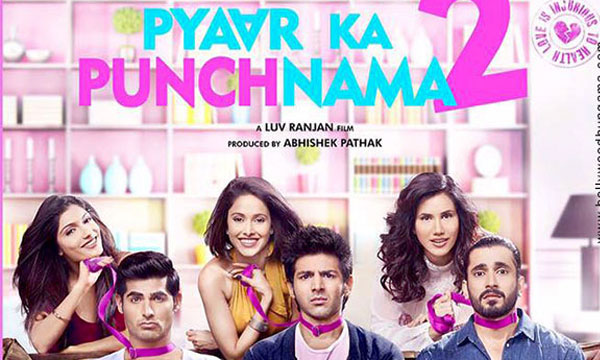 While the movie is coined as the sequel of the 2011’s sleeper hit, Pyaar Ka Punchnama, the story itself doesn’t actually follows up the life of previous characters; but instead introduces them as three new ‘bechara’ guys stuck with scheming, manipulative women in their lives.

Read Review: Jazbaa Movie is An Edge Of The Seat Thriller

The story remains clichéd and misogynistic – just more exaggerated and a tad less hilarious than its prequel.

The men are stereotyped as always-trod-upon poor guys and women are branded as primped up, shopaholics who have nothing better to do than use the men in their lives for money and as drivers to malls and salons.

The highlight of the movie is yet again a ranting monologue against women by Kartik Aaryan and is definitely more epic this time around.

Although the story is predictable and some jokes offensive to women, Pyaar Ka Punchnama 2 still manages to deliver hilarious performances by all actors and some bang on parodies.

It lacks originality but is still a good one time watch. Men are going to love it of course; women might feel a little miffed at their incorrect hackneyed image.

Check out what others have to say about Pyaar Ka Punchnama 2:

#PyaarKaPunchnama2 Most epic movie of the year. Better than the first part. Full Paisa Wasool. Must watch…

#PyaarKaPunchnama2 quite a movie to watch. It’s hilarious in parts but be sure its funny all the time. #recommended

#PyaarKaPunchnama2 is outright hilarious!😂 Thumbs-up to the complete cast @PKP2Official 👍

The film works only because of the witty lines. They make the film what it is #PyaarKaPunchnama2

#PyaarKaPunchnama2 is just like the original film. Full of cliches but hilarious nevertheless.

If you haven’t seen the first part you’ll find #PyaarKaPunchnama2 a decent entertainer. Don’t expect much and you may come out with a smile.