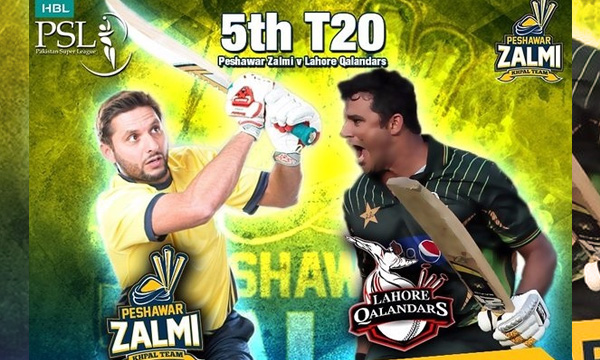 UPDATE: Peshawar Zalmi beat Lahore Qalandars with a huge margin of 9 wickets in a match that turned out to be nightmare for Qalandars in the end.

Lahore Qalandar’s got flattened by Zalmi’s bowling attack and at one stage they were 4/3 in the second over. They could not get out of the early damage done to them and wickets fell regularly. In the end they hardly dragged their total to 118-6 in 20 overs that opponents got over on the loss of only 1 wicket. Tamim Iqbal’s 55 runs not out knock was prominent in run chase with Muhamamad Hafeez’s 43.

We know you want to watch this! @JunaidkhanREAL lights up the Dubai night, as well as @henrygayle's stumps! pic.twitter.com/vqXzU3EaPl

For Peshawar Zalmi. it would be a greater challenge tonight as Lahore Qalandars have the potential to rise up again after yesterday’s defeat that must have intensified their hunger to win. Secondly, they have some top individuals like Chris Gayle, Umar Akmal and Dawyne Bravo and if they click, this time, they can be really dangerous. Umar Akmal might be included in the side for this match. Peshawar Zalmi is said to be the best combination in this league so far with depth in batting and bowling and skipper Shahid Afridi will try to continue the winning momentum. Not sure, but the chances of this game to be a high-scoring one are high.

Players to Watch: No doubt about the master blasters Chris Gayle and Shahid Afridi will be the focus of attention. Their fans will love them to put up an impressive show by hitting sixes and fours; that’s really missing in this league.

It's been a long night for @lahoreqalandars! @PeshawarZalmi showing no mercy! Update pic.twitter.com/l7wGybjE2n

It's looking all too easy for @PeshawarZalmi! How will @lahoreqalandars respond? Score update pic.twitter.com/22rmFomhvc

It's all going wrong for @lahoreqalandars after a brilliant display from @PeshawarZalmi! Update pic.twitter.com/fs8oy4rRXC