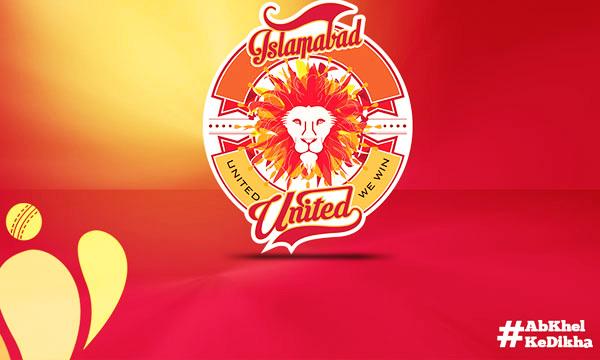 Islamabad United (IU) is a PSL 2016 franchise cricket team which represents the city, Islamabad. The team was developed in 2015 following the PSL 2016 announcement by PCB.

The Islamabad franchise has been purchased by the Venture Capital Leonine Global Sports (owner Ai Naqvi) for US$ 1.5 Million. Have a look at the Islamabad United logo, squad and fixtures.

The Islamabad United Team logo is red and yellow in colour with a lion’s face in the centre of the logo. The insignia showcases the true essence and spirit of the team. The logo reads “United We Win” exuding the unity and integrity of the team. View the logo below; Islamabad United squad 2016 has been finalised for the inaugural season of Pakistan Super League. The squad of Islamabad United included a total of 16 players (5 foreign and 11 local players).

Previous Australian batsman Dean Jones, the Head Coach for Islamabad United, has long established his signing for the upcoming PSL 2016 while  Shoaib Akhtar is the Bowling Coach of Islamabad United (IU). Jones has a good reputation with the Pakistani players; Misbah ul Haq is the captain of Islamabad United.

Check out the Upcoming Match Schedule for Islamabad United below:

Pakistan T20 league is to take place on February 4th and will be continued till February 24 in Dubai and Sharjah. Seven firms have participated in the bidding of the franchise in the Pakistan Super League (PSL) 2016.