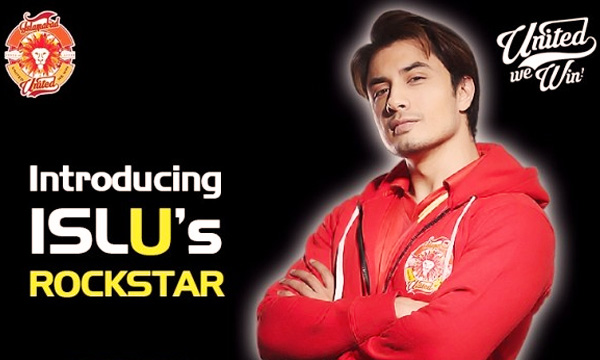 UPDATE: After the announcing the multi-talented Fawad Khan as the brand ambassador for PSL’s franchise Islamabad United have hit another sixer as they have roped in the rockstar Ali Zafar in the ISLU team.

As if Fawad Khan was not enough for the team, the franchise managed to bag a second achievement. After partnering with Ali Zafar, Islamabad United has become the only participating team in PSL 2016 to rope in the biggest and most successful names of the Pakistani media industry.

Another icing on the cake is that Ali Zafar is one of the prominent faces of PSL 2016. The team has already gained major popularity as there could have been no better choice than the star package of Fawad and Ali. Both the celebrities have been incredibly successful as singers and versatile actors, gaining immense international recognition. Regarding being a part of the ISLU team Ali said;

“It’s really surreal, interesting and strange how things come together. As a child, I inspired to be a cricketer, a passion which was later replaced by wanting to become a singer. But for some reason the spirit of a cricketer always remained deep inside. I do like to wear different hats, but more than everything I like to be a dreamer. When I used to watch Indian Premiere League matches I used to think and dream that someday Pakistan will have its own super league and that day I will have a team of my own. So for me more than a partnership, it’s the manifestation of a dream. Given the opportunity to compose, write and sing its anthem and open the season with a performance on such a big scale is a big honour in itself. And now with Islamabad United things are going to get even more exciting. We have the man himself Misbah as our captain, the legendary Wasim Akram as mentor and Fawad Khan as our brand ambassador. I think we are packed to display a killer performance. Let’s play and have some fun! Watch out for the song.”

Before the official announcement of both Ali and Fawad as the star package, ISLU’s social media pages decided to create hype and invoke fans’ interest; they posted images of figure with its bag and asked fans to guess who it was, invoking a lot of mystery and interest amongst the sports aficionados.

Looks like the fans will get to see more and more of the star actor, singer and model, now that he has become the team ambassador for Islamabad United. PSL is scheduled to start from February 4th, and will last till February 24th.

PSL is to begin preparations for the grand event and the franchise owners are quite buoyant and excited regarding the launch ceremony.

Proud to partner with @islamabadunitedpsl as their Team Ambassador. Looking forward to the opening season of #HBLPSL. #unitedwewin #ISLU #cricket

Many other celebrities have also endorsed the PSL 2016 teams such as Hamza Ali Abbasi and Humaima Malik for Peshawar Zalmi and Humayun  Saeed, Fahad Mustafa, Adnan Siddiqui and others for Karachi Kings, owned by ARY network. The cricket stars part of Islamabad United, such as Shane Watson, Misbah-ul-Haq, Mohammad Irfan and Babar Azam have now been joined by another star, Fawad Khan.

His association with Islamabad United has definitely been a major hit, before the PSL launch.

The multi-talented, internationally recognized star who is doing several popular projects in India and Pakistan, rose to heights of fame through Pakistani drama serials like ‘Humsafar’ and ‘Zindagi Gulzar Hai’ has now endorsed Islamabad United, creating further excitement for the PSL event.