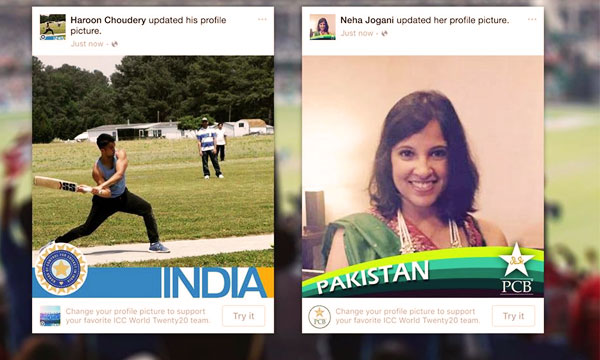 Recently facebook provided a chance to cricket lovers who wanted to fully support their favorite teams ahead of World T20 2016 by using the profile frames, and Indo-Pak cricket fans availed this opportunity to promote the message of peace and love.

Where a number of Pakistanis and Indians from Karachi to Lahore and from Mumbai to Kolkata changed their display pictures, reflecting the love for their country, thousands of them also participated in an online campaign #ProfileforPeace by uploading profile pictures with the neighboring country frames delivering a message of peace and harmony. The campaign is in full swing and winning the hearts of many! Just a few days to go until final, much-hyped clash between Pakistan and India to held on 19th March at Kolkata, Eden Garden.

The #ProfileforPeace Facebook Campaign is likely to become more viral on facebook and other social media platforms until the 19th. The #ProfileforPeace drive not only cleared the air between the tensed fans of the two countries but also proved that cricket can unite people across the border. It reflected that hatred can not win over the emotions of love and goodwill these countries hold for one another.

The #ProfileforPeace campaigners have proved that cricket diplomacy can work as a catalyst for peace. It highlights that cricket is just a sport and must be taken lightly, not treated as a battle.

Pakistan’s first match was scheduled to be played at Dharamsala but shifted to Eden Gardens, Kolkata owed to security concerns. Pakistan will be playing a match on the Indian soil and that is the real victory for Pakistan.

With online campaigns like #ProfileforPeace, we can hope for the betterment of the relations between the Indian and Pakistani public.