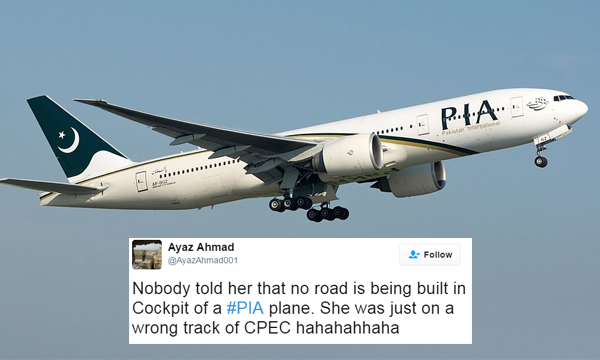 PIA is having a bad week. Earlier a video of a pilot caught sleeping in the passenger compartment ignited a furor on social media. Apparently, he had handed over the plane to an under-training pilot.

But it is even worse this time. Another video has been leaked in which a PIA allowed a Chinese woman entry in the cockpit for the whole journey.

Geo News reports that Captain Shahzad Aziz invited a young Chinese during PIA flight PK-853 from Tokyo to Beijing. Her admission was unauthorized and she exited the cockpit after two hours as the plane landed.

For those who don’t know, the law prohibits the entry of unauthorized people into the cockpit at any time during flights. It is a safety hazard and it the PIA’s pilots responsibility not to allow entry of a unoffical person.

Sarcasm at its best

This one said it right!

The largest institution in the country, our Govt, completely dysfunctional. How can we expect other inst to run without conflict.#PIA

Nobody told her that no road is being built in Cockpit of a #PIA plane. She was just on a wrong track of CPEC hahahahhaha

Is it cause Pakistani are obsessed with fair-skinned people?

Well with these back-to-back episodes, PIA is in a lot of trouble. What is next to come, let’s wait and watch.