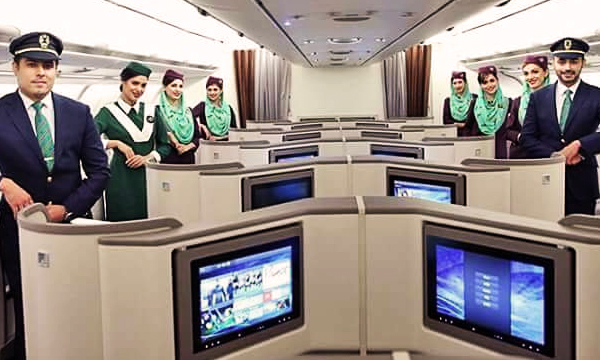 UPDATE: Prime Minister Muhammad Nawaz Sharif inaugurated PIA’s Premier Service on 14th August at Islamabad Airport. The airline is looking to revive the glory it once possessed through the launch of PIA Premier Service.

View the inauguration ceremony pictures below:

Six flights have been introduced per week for now, flying from both Islamabad and Lahore till London offering an improved in-flight menu and extended entertainment. The air fares are to remain the same for now, PIA claims.

View the new In-flight menu for PIA Premier Service below:

According to Dawn News, Pakistan International Airlines (PIA) has received three Airbus A330 air crafts from SriLankan Airlines on a wet lease.

Three air crafts will cost PIA an aggregate of $264000. Each aircraft will cost around $88,000 travelling for 11 hours daily, Dawn News reports.

Acquiring planes on wet lease depicted that the flights will still be operated by Sri Lankan Airlines while the aircraft’s exterior will be painted in conventional PIA’s logo and colours.

Full view of PIA's newly leased A-330 as it rolled out of Ispahani hangar after wearing PIA livery ✈️ pic.twitter.com/ymkXScXonN

The crew of the airline have been given a stylish makeover. The credit of their uber glamorous look goes to leading fashion maverick, Nomi Ansari. “With new aircrafts, more professional crew and improved service standards, the new service aims at providing an altogether different experience to the passengers. This service will go a long way in helping PIA regain its market share both domestically as well as internationally,” he said. – Samaa One too many times has it happened that the best existing Airline, PIA, in Pakistan has disappointed us. People had no other choice but if they did, they might have boycotted from this one, like Shaheen International, centuries ago.

A team of PIA, led by the CEO Bernd Hildenbrand flew to Colombo to finalize the contract which included negotiations with the Sri Lankan Airlines for leasing the A-330 air crafts.

These will be used for the premier service only, which will be launched Mid-August.

Let’s wait and see when we get to experience these changes.