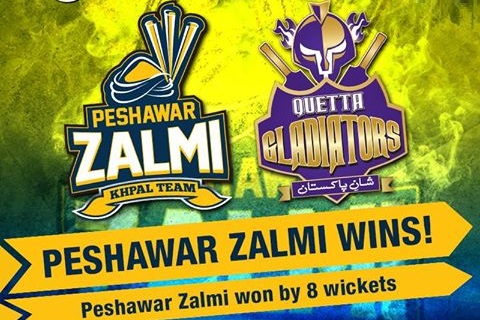 UPDATE: Peshawar Zalmi has taken revenge from Quetta Gladiators by defeating them with 8 wickets margin, that could have been most embarrassing defeat if Grant Elliot and Zulfiqar Babar would not have added 63 runs for the last wicket partnership.

What a brilliant spell bowled by Shahid Afridi (7-5) who took five wickets, giving away just 7 runs in his four overs. Quetta Gladiators lost their first wicket at 40 runs and they were 66-9 at one stage when Elliot and Babar came on to the field for rescue.

Chasing 130, was not proved a big deal for Zalmi’s and they reached the target comfortably in the end on the loss of two wickets. Shahid Afridi was given man of the match for his outstanding bowling figures.

The two top teams at the PSL T20 2016 points table are going to have a clash between them in Sharjah Cricket Stadium today.

Both these sides have already qualified for the play-offs, so win or lose, it won’t affect their entry to the next stage of the event.

Good news for Gladiators is that Kumar Sangakkara has also joined the camp after Grant Elliot. Shahid Afridi and his bowlers must have to get rid of him early; otherwise he can turn the situation drastically.

It is expected that these sides can try a different team combination by giving chance to two or three players who have been sitting on the bench for a while. Last time when they played against each other, Zalmi had to face  defeat and now they will really try to take revenge in order to prove their dominance.

Cricket gurus are predicting a final match between these two if the things continue this way and these sides keep top two positions on the point tables.