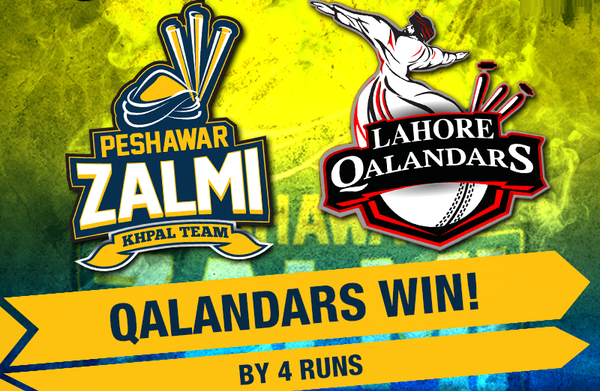 UPDATE: Lahore Qalandars got the much needed victory over Peshawar Zalmi in a close finish by just four runs. Cameron Delport proved a star for them in both batting and bowling.

Qalandars were invited to bat first by Shahid Afridi after winning the toss and placed a respectable total of 164 runs on the board despite Chris Gayle bowled out on a duck again. Cameron Delport 78 and Umar Akmal’s 52* helped Qalandars to set up a fighting total.

That was another thriller in the #HBLPSL! @lahoreqalandars get a much needed win! #LQvPZ pic.twitter.com/efjklHs13O

That was a nail-biting contest. Great game #Zalmis, you won many hearts! Congratulations to @lahoreqalandars for winning this one. #LQvPZ

In reply, Zalmi ‘s kept loosing wickets and lost the match by 4 runs after nail biting finish. Qalanadars looked too impressive when they cam on to bowl and specially in fielding department. David Malan showed a resistance with his 42 runs while Cameron Delport and Keven Cooper took three wicket each.

Delport was awarded man of the match for his all round performance. Qalanadars has kept their hopes alive for this contest with this victory while Peshawar Zalmi and Quetta Gladiators have already made their way to the play-offs.

Peshawar Zalmi , the top team of PSL T20 2016, will have a showdown with Lahore Qalandars today at Sharjah Cricket Stadium.

This is the second match between both sides and Zalmi’s easily won the first one against Qalandars. This might be the last chance for Lahore Qalandars to keep their hopes alive for the contest. At present, they are at bottom of the points table.

The Qalandars will have to perform as a unit with the hunger of winning and aggression that’s missing in their play.

On the other side, Peshawar Zalmi is maintaining their winning streak in convincing fashion and entertaining their fans, so no worries for them, they are heading in the right direction.

Chris Gayle had a start with 30+ runs in the previous match and stayed on wicket for few overs, Qalandars really need his fireworks along with a sense of responsibility from Umar Akmal, because only they can lift up their side from this tough situation against the odds.

REWIND: watch @AzharAli_ shut up his critics with a wonderful catch to take the first #Zalmi wicket. pic.twitter.com/nmF1TEhvy0

Might have been straying down leg, but that's the second time in a row @JunaidkhanREAL has got Gayle! pic.twitter.com/YXqpjVAtsT