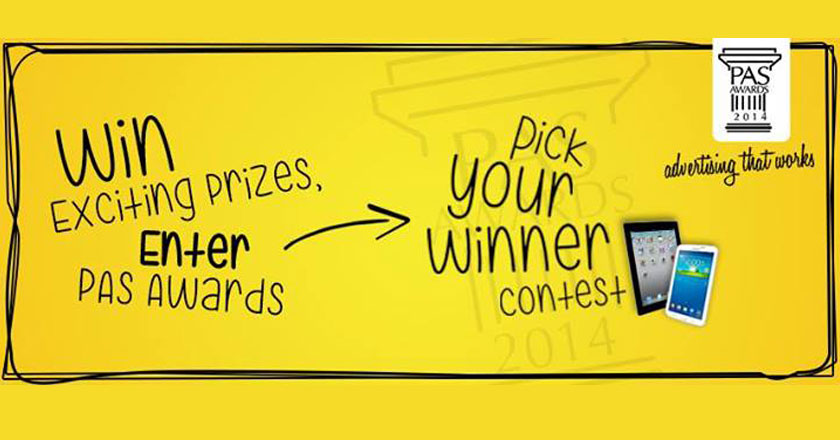 The PAS Awards, initiated in 2011 has come to be recognized by the advertising industry of Pakistan as Pakistan’s most elite advertising awards.

Now in its fourth year, the awards continue to showcase and honour marketing campaigns that display a compelling strategic premise, creative and innovative ideas, excellence in execution and strong results.

Of the total 197 entries received this year, 85 have been nominated as finalists across 32 categories.  Of all the nominations, one entry will grab the “Campaign of the Year” award and one will win the “Best Original local Campaign” award.

The winners in each category will be disclosed on 16th May at the Award ceremony.

For the first time, PAS Awards has unrolled an exciting contest to guess which of the nominated entries will win the “Campaign of the Year” award and also the most coveted “Passion for Pakistan” category award.
In three simple steps, participants can guess the winner and win an Ipad or a Samsung tablet.
Marketed through print, OOH, mailshot and Radio, PAS Awards 2014 “Pick a winner” contest is already getting a huge response as voters are excited to guess the actual winner and stand a chance to win an ipad or a Samsung tablet.
The winners will be picked through a lucky draw and announced on 19th May, 2014 on the digital media.
The contest is open till 12th May, 2014 so for those who have not voted yet, there are still 2 more weeks till the contest ends.