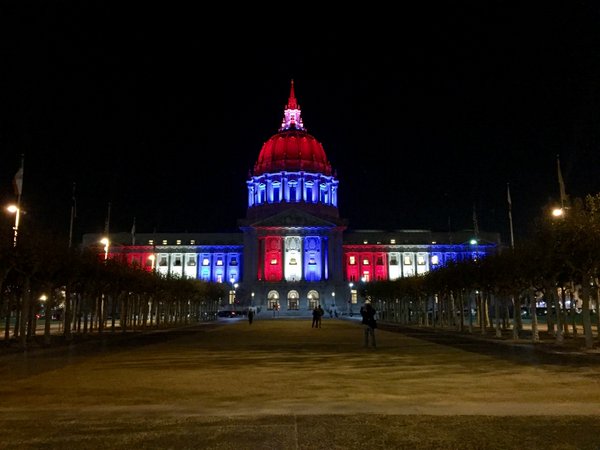 In unity with the survivors and the victims of the catastrophic Paris Attacks, buildings and landmarks from around the world have lit up with the vibrant colors of the tricolor French flag.

More than 100 people were murdered inside a Paris theater after being held as hostages. Dozens more were reported dead in several shootings in the central capital of France

Leaving scores of humans dead, the deadly massacre has caused the global humanity to rise in solidarity. Moving melancholic images if iconic historical places have now surfaced on Twitter who have donned the band of blue, white and red to pay a tribute to those who lost their lives.

From Toronto’s CN Tower to New York’s One World Trade Center, Wembley Stadium in England to Convention Centre in Dublin, the colors beamed in the night’s darkness in grief of Paris.

View images of landmarks around the globe here.

Our neighbors at the Omni Hotel downtown have donned the French colors to honor victims of the Paris attacks. pic.twitter.com/Q6rx03KVVc

One World Trade lit in blue, white and red in solidarity with the people of France. pic.twitter.com/pq9A5K3qsr — ABC News (@ABC) November 14, 2015

Our thoughts and prayers are with the people of #France tonight. pic.twitter.com/CP9q4bJTGJ — Long Center (@longcenter) November 14, 2015

The convention centre here in dublin lit up in the french colours🏼 pic.twitter.com/FYzacBe938

Tonight, our Eiffel Tower will remain dark in memory of the lives lost in the attacks in Paris. pic.twitter.com/FFr55bRnHE — Paris Las Vegas (@ParisVegas) November 14, 2015

One World Trade is lit in blue, white and red in solidarity with the people of France after Paris attacks. pic.twitter.com/HHW2WRxSDt

#Brisbane City Hall has also been lit tonight to show our support for the people of France #ParisAttacks pic.twitter.com/bvKtLgqxB1

KOMO Photo: @CenturyLink_Fld Lit up in French colors tonight to honor the victims in #ParisAttacks pic.twitter.com/7JiMcMK3jQ