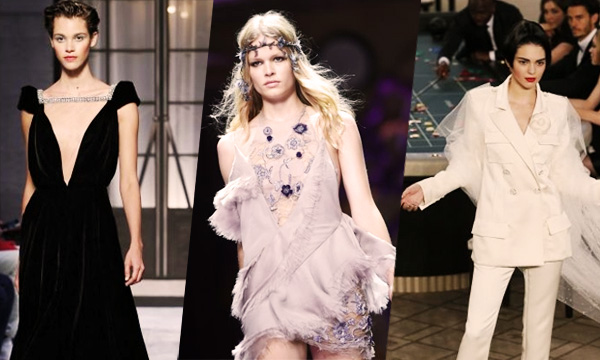 With all eyes on Paris from January 24-28 for Haute Couture Week, designers’ spring/summer 2016 collections aren’t the only thing the fashion world will be watching. As well as showcasing collections, models from all kinds of different backgrounds showcase their unique talent on the catwalk. And what better place than the runway to get noticed by the biggest designers and most prestigious labels? Here’s a look at some of the hottest talent to watch out for at the SS16 haute-couture shows.

The favored faces of the moment — whether models, brand muses or it-girls — will all be heading to Paris this January. Two of the hottest names this year are Kendall Jenner and Lily-Rose Depp. Current darlings of Karl Lagerfeld, the pair should at the very least be seen on the Chanel runway. Both already modeled at the French fashion house’s last haute-couture show, which saw Paris’s Grand Palais exhibition hall transformed into a casino. In fact, Kendall Jenner closed the show in a military-inspired bridal ensemble. Anna Ewers, recently crowned female “Model of the Year” for 2015 by the Models.com website, is another must-have model who’s likely to hit the runway for several designers. Last season, the young German was spotted on the catwalk for Chanel and Atelier Versace. Other up-and-coming faces to watch out for at Haute Couture Week are Anna Cleveland — already seen modeling collections for Jean Paul Gaultier, Elie Saab and Alexandre Vauthier — as well as Mica Arganaraz and Lexi Boling, all of whom are very much in demand.

Although less well-known to the public, some models clock up catwalk miles like a marathon, starring in back-to-back haute-couture shows all week long. Swedish model Emmy Kruger, for example, takes to the runway for a majority of haute-couture houses without necessarily creating a huge buzz. Young Austrian model Stella Lucia is proving similarly popular. She’s highly sought after by a host of designers, whether at Paris Fashion Week or at Haute Couture Week. At the last haute-couture event, this angelic blonde trod the catwalk for Jean Paul Gaultier, Alexandre Vauthier, Chanel, Giambattista Valli and Atelier Versace. No doubt she’ll be back again for the January 24-28 shows.

American, British and German models aren’t the only ones catching the eye of designers this year, with some of France’s homegrown talent heading for the runway too. Two French models in particular — already seen at the last Victoria’s Secret Fashion Show — are among the most coveted names for Paris Haute Couture Week. Cindy Bruna has a successful international career and often models collections for haute couture houses. She regularly posts photos on social networks with French fashion designer Olivier Rousteing and has modeled for Zuhair Murad, Jean Paul Gaultier, Elie Saab and Alexandre Vauthier. She’s sure to be gracing the catwalk at the upcoming haute couture shows. Discovered by an Elite Model Look contest, Pauline Hoarau is another French model whose profile is rising with each season. She already modeled in haute couture shows last season for Valentino, Jean Paul Gaultier, Bouchra Jarrar, Armani Privé, Chanel and Schiaparelli, and is likely to be back again for this edition.

Philippines Bags ‘Country of the Year’ Title For Beauty Pageants