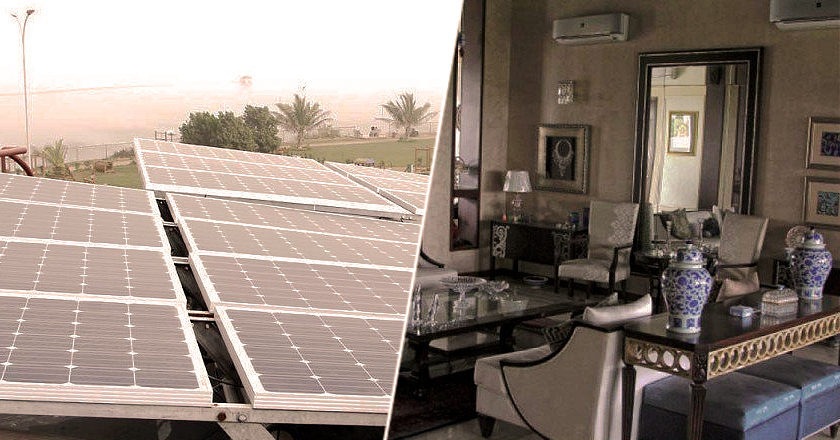 In times when the climate change is taking a toll on our country and we are fast going out of fuel reserves, solar powered energy seems like the one stop solution for everything. However, is it really affordable enough for those who actually need it?

The architect of Pakistan’s only solar powered house situated in Defence Phase VIII, Ali Naqvi, states that when he was designing the house, he had no access to electrical supply and hence, resorted to setting up the house with solar power panels, the only choice at that time.

The cost for him to install the green panels was worthwhile because in an area where electricity had yet to be installed, the utility connection eventually would have cost him PKR 1.4 million. He further justifies the cost by claiming that it helps save on all electricity bills in the future, with the only cost of a battery replacement every two years.

While talking to The Express Tribune‘s author/reporter, Ishrat Ansari, Ali further explains how only one heavy power consuming item, such as an iron or the water pump, can be switched on at a time when using solar power panels for energy, forcing us to learn to be more energy conservative.

He goes on to explain how the house needs to be designed in such a way that the natural sun light and winds help keep the house cool and lit all day long without the need for excessive artificial utilities. For the same reason, Ali has installed double glazed windows in this particular house and designed it in a way that the daylight reaches every nook and cranny of the house.

Zafar Alam, director of International Greenery Limited, being the contractor for this green house’s solar powered system and an advocate of green energy, agrees with Ali Naqvi.

He quotes PKR 150,000 as installation fee for a solar powered system that will allow the house to run two fans and two bulbs, again justifying the cost by claiming it as a one off investment.

While the cost may seem affordable to the elite class, is it really within the reach of the majority of the population of Pakistan?

Furthermore, even if the governments and banks did provide incentives to provide the funds to invest in this technology, do Pakistanis really have the luxury to have custom designed houses with double glazed windows, situated such that to keep the house cool and alit?

Moreover, with more than half a dozen people living in a typical Pakistani house, are two bulbs and two fans enough to keep everyone going at the cost of PKR 150,000?

The idea is all good and green and we are sure all Pakistanis are on board with it but even with the (unlikely) help from the government, the idea is unrealistic for Pakistan, at least for the time being.

Where necessities like food and security are unavailable, the notion of the not-so-free solar electricity can only be termed as a dream.

We can only hope that with time maybe, the technology is more accessible and affordable for a Third World nation like us to be able to enjoy the benefits of it.