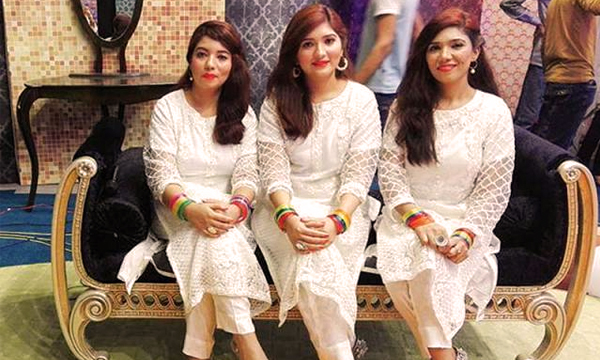 A trio made up of sisters Fauzia, Saba, and Zille Huma, who claim to be the first ever qawwali singing female group in Pakistan will be releasing the video for their qawwali Allah Janay pretty soon; the Qawwal Group is called the Manwa Sisters.

Originally from Faisalabad, the ladies have become quite famous. The ladies belong to the renowned gharana, which is responsible for producing many a great talent, all the way from Kerala. Saba, one of the three talented sisters said this about their connection to music, “Indian superstar Dilip Kumar would frequently invite our grand uncle Rasheed Faridi at his place to listen to him. After our grandfather’s death, no one was interested in continuing with music.”

She also added what the name of the group represented: “We chose the word Manwa because that (literal meaning of the word in Urdu) is what we want to do. We want to get our talents recognised.”

The sisters have been singing from an early age, she added, “We have been singing at family events and private functions for a while. It wasn’t until three years ago that we finally decided to start our group and take music up as a profession.”

They are also keen on doing music for films and do not shy away from covering songs of their favourite music legends. They have also been training under qawwali and classical music maestros.

The recent move to Lahore is more focused towards coming closer to opportunities that advance their careers as Saba pointed out.