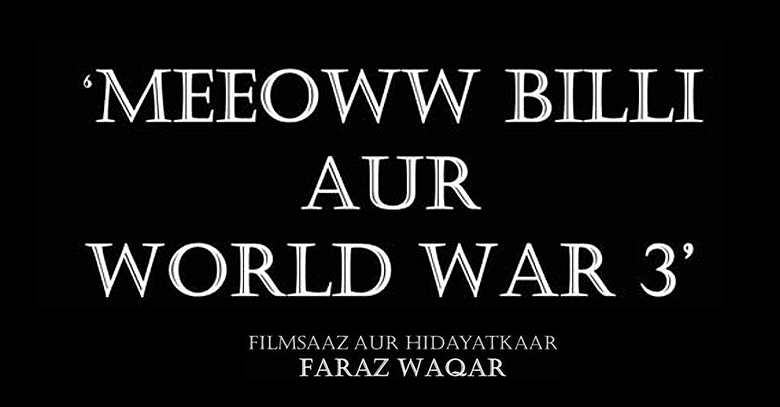 After receiving critical acclaim worldwide, Pakistan’s first silent, ‘Meeowww Billi aur World War 3’ is all set to screen, for the first time in Pakistan at the Gandhara Film Festival & FILUMS (Lahore) festival in Pakistan in 2013-2014.The movie will be shown today Dec 20, 2013 in Lahore as part of the Official Selection at the Lahore International Film Festival – Alhamra Arts Council Hall # 2.The film is written and directed by Faraz Waqar, an active filmmaker since the year 2012. In times when the media is crossing the technical boundaries with 3D and 4D cinemas, Faraz took a unique medium to showcase his talent to the world.Commenting on his idea of making a silent movie, Faraz said, “When Pakistan came into being in 1947, the talkies or talking films were already the norm worldwide. So Pakistani cinema never experimented with silent films,” says Faraz Waqar, writer and director of Pakistan’s first silent film. “By the time of partition in 1947 and the creation of Pakistan, the age of silent films was over. There has been no silent film made by the film industry in Pakistan after partition.”

‘Meeowww Billi aur World War 3’ is an artistic film inspired by the 1920s Hollywood cinema – the golden age of silent films around the globe. The movie is based on the political situations in Syria and the Middle East, wrapped around a comical script that actually tells the harsh realities of that time.

The film has been shot entirely in the UAE and involves an international team of actors, cinematographers and crew from India, US, UAE, Australia, Canada, Syria, Iran, Lebanon, Saudi Arabia, Pakistan and Romania.

Waqar’s first film 9:11 am was one of the only two Pakistani films showcased at the Cannes Film Festival in 2012 in France.

In August 2013, Faraz presented an experimental music film titled ‘Imagineer’ based on Nazia Hassan’s music as a tribute to Nazia Hassan on her 13th death anniversary. The music film also received extensive coverage in news and social media in Pakistan.