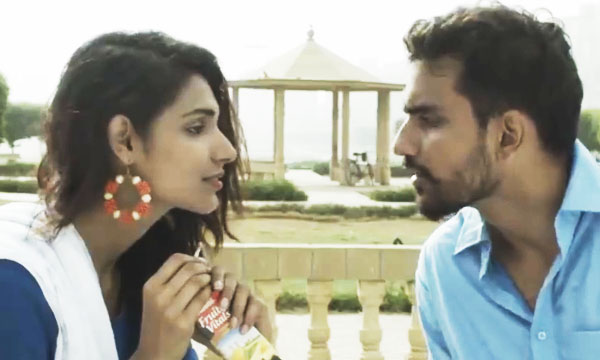 The model-turned-actress, Amna Illyas who attained fame after her movie Zinda Bhag in 2013 that almost made it to Oscar, will now be seen in the upcoming Pakistani movie, Gardaab.

The starlet will be sharing screen space with the rising actor, Fawad Khan. The hero has been very active in Pakistan’s theater scene.

The teaser of her movie is now out and the storyline reveals itself to be a serious intense.  Directed and written by New York- based Pakistani director Harune Messy, the film Gardaab revolves around a serious love story set against contemporary Karachi surrounded with a lot of turmoil.

Earlier, the first look of Gardaab was also revealed and it looked intriguing.

One of the songs from this movie is based on the Lyari dance called Lewa which will be performed by the Lyari people. The veteran actor Naseeruddin Shah is also expected to make a cameo appearance in the movie.

Other than Gardaab, Amna Ilyas will also be seen in Driven and Ready Steady No.

Talking about her first project Driven, which is undergoing post-production, is based on a serious plot revolving around the encounter of two people. The movie stars Kamran Faiq opposite Amna Illyas. Other stars include Rehan Sheikh, Javed Sheikh, Adnan Shah Tipu and Omair Rana.

Moving on to her third project, Ready Steady No, which is a mainstream cinema project, revolving around a comedy-romance genre seems like a complete entertainment package.

Directed by Hisham Bin Munawar, the film revolves around the obstacles that a couple faces when they set their minds on tying the knot.

The movie stars veteran actors Salman Shahid, Nargis Rasheed, and Ismail Tara in prominent roles, whereas the male lead, Faisal Saif, will be making his acting debut with the film.

With three completely different characters, Illyas is all set to make a mark on the cinemas screens this year!