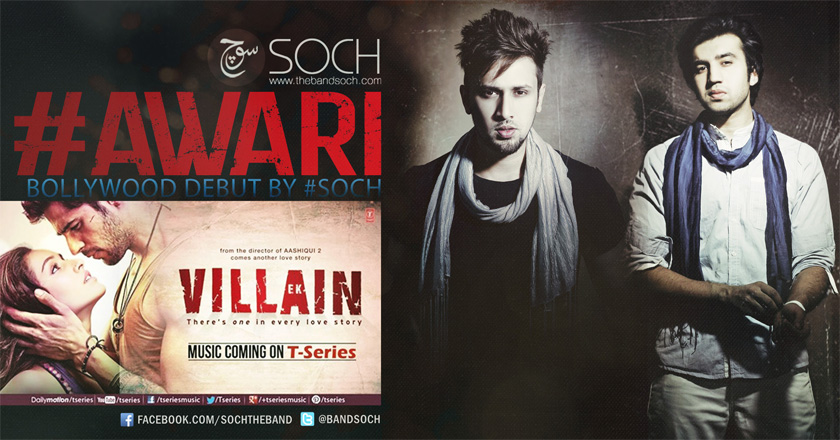 The track titled ‘Awari’, is written, composed and rendered by Adnan Dhool and Rabi Ahmed of Soch. In contrary to the original version featured in Nescafe Basement (Season 1) under the mentorship of Xulfi in 2012, Awari in Ek Villain will feature female vocals of the US-based Momina Mustehsan, in a duet with Adnan Dhool.

Ek Villain stars Sidharth Malhotra and Shraddha Kapoor in the lead roles, while Riteish Deshmukh will make his debut as an antagonist with this film. Ek Villain is produced by Ekta Kapoor under the banner of her production house Balaji Motion Pictures. The expected release for Ek Villain is June 27, 2014.

Soch is an exclusive PMR and Indya Record artist, and hence not a new name to Pakistani music fans. With their songs like Bandeya, Hamesha, Arz, Uth Jawana, Khabar (OST Chambaili) and Jinnah; Soch is known for its bold and thought provoking songs.

‘Awari’ is not a typical item number that every bollywood movie has. ‘Awari’ will be filmed as a rock-style bar track, laden with emotions and is in fact, organic to a pivotal sequence in the film’s second half. Prachi fell in love with the track on first hearing and the plan is to style her in a never-seen-before avatar.

Speaking at this moment Soch said,

“Soch is grateful to Director ‘Ek Villain’ Mohit Suri for showing faith in Soch’s talent and for believing in Awari for Ek Villain, Momina for lending her vocals for Awari’s duet, Producers at Balaji Motion Pictures Ekta Kapoor and Tanuj Garg, Amul and the entire team at Balaji Motion Pictures.  Soch appreciates Mustafa Zahid for being supportive in this project and wish him luck with his latest release “Zarorat” for Ek Villain and Kanwal Kholi (Indya Records) for being part of the team, representing Soch in India and making all this possible.”

Awari by Soch, was originally featured in Nescafe Basement in 2012, which in no time, gained popularity and has so far been rated as the most popular track of Nescafe Basement, Season 1.