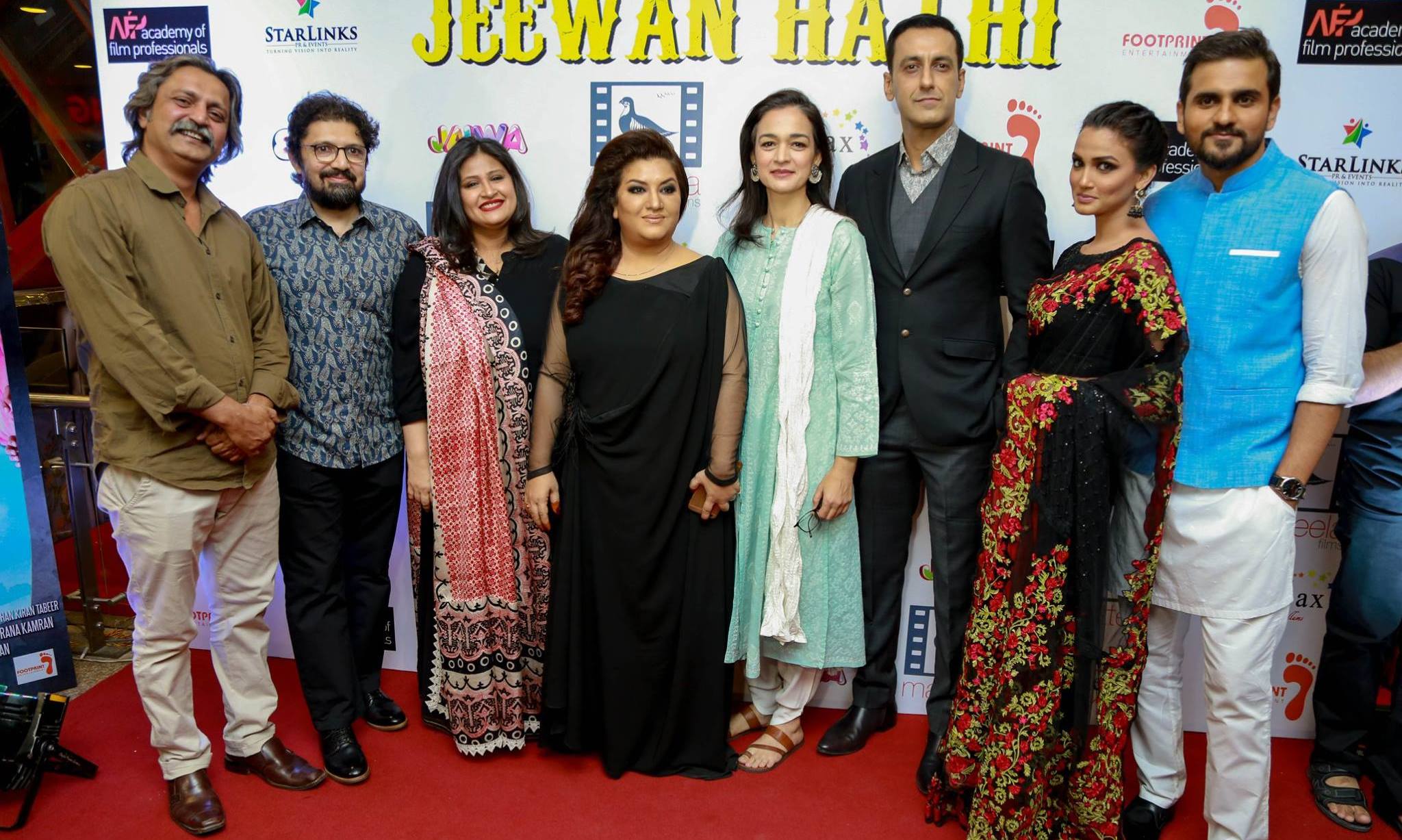 The cast and crew of Jeewan Hathi walked the Red Carpet tonight along with other stars and socialites of the Pakistani entertainment industry at the premiere of the eagerly awaited movie Jeewan Hathi at a local multiplex.

The Red Carpet of this movie extravaganza was a star-studded affair with well-known names from the world of fashion, entertainment and art such as Hina Bayat, Angeline Malik, Tipu Sharif, Ainee Jaffery, Anoushey Ashraf, Adnan Siddiqui and Nabeel Qureshi were present, among many others.

The cast certainly stole the show at the Red Carpet, with Kiran Tabeer’s high-fashion look, and Saifi Hassan with his casual look and Fawad Khan looked dapper in a kurta shalwar. Adnan Jaffar looked hip in his signature trendy but smart-casual ensemble. Samiya Mumtaz looked every bit her elegant self while the star of the show Hina Dilpazeer sported a playful yet elegant look.

The movie was well-received by the stars, media representatives and socialites with most talking about the comic timing of the movie and its brilliant satire on the topsy-turvy universe of television in Pakistan. The cast was on point with their performances –Hina Dilpazeer stole the show with her stellar performance and larger than life presence on screen, while Kiran and Fawad had incredible chemistry together in their roles as the ideal, loving couple.

It was refreshing to see Samiya Mumtaz cast in a very different role. Saifi Hassan and Adnan Jaffar brought their usual quirky flair to the movie, while last but not least, the short cameo by Naseeruddin Shah was an unforgettable one.

JeewanHathi is a venture made possible by the brilliant direction of Meenu Gaur and Farjad Nabi of Zinda Bhaag fame, together with a creatively-crafted script by Fasih Bari Khan and the support of the producer Mazhar Zaidi who now has 4 feature films under his belt.

The film, which is a black comedy about the topsy-turvy universe of television in Pakistan follows the life of an ideal, loving, middle class couple which finds itself on the brink of divorce when suddenly hurled into a TV game show, lured by the possibility of winning a gigantic, flat-screen TV.