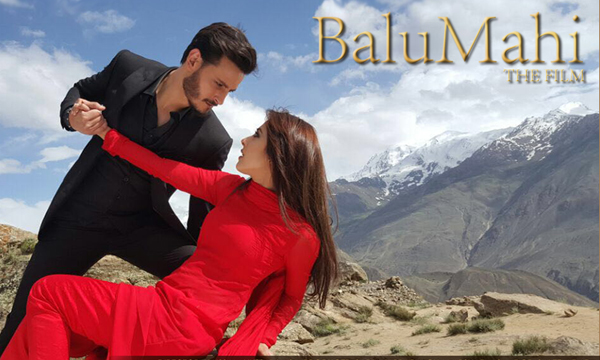 With a multitude of teasers, songs and trailers released prior to the movie’s premiere, it’s not difficult to figure out the story. Balu Mahi is a typical romantic comedy, with a side dish of unrealistic scenarios, unnecessary drama and well placed music to kill boredom. Watch the trailer below:

Before you go any further, the rest of this review is full of spoilers. So quit now, if you want to see the movie for yourself.

Bilal aka Balu (Osman Khalid Butt) shows up at his ex-girlfriend’s wedding to express his undying love for her – but at the wrong wedding! The bride Mahi (Ainy Jaffri), who is tired of being caged up by her family, now thinks it’s a good idea to make a run for it.

Once they run away and Balu comes back to his senses, he wants Mahi to go back home, but she insists on staying away from her family. Mahi calls up her cousin Sharmeen for help – enter the gorgeous Sadaf Kanwal – who betrays Mahi and sends their family to her location instead.

What ensues is a typical cat and dog chase with musical numbers (of course), Balu and Mahi make their way through the city, while trying not to be caught.

On the run, they come across different people and landmarks of the city, discovering new things about the city and themselves. This ends in Mahi going back to her family and Balu getting beaten up to within an inch of his life.

Now, down to the nitty-gritty.

The movie starts off seemingly inspired from Jab We Met with hints of Bachaana and Karachi Se Lahore. What really brought the movie down is OKB. He’s funny with his delivery of punchlines, but unfortunately, his character is just not believable. Young Pakistani men – even those who have been abroad – just do not have the guts to stop a wedding and run away with a bride whom they have never even seen before. Ainy Jaffri’s portrayal of Mahi is okay – she’s good in some scenes and off the mark in others.

However, Sadaf Kanwal truly shines in this movie with her seductive role – but then again, because she is a model, she is well suited to it. Balu’s Dado, played by Durdana Butt is feisty and adorable and cares fiercely for Balu. The cinematography is pretty good, aside from the close shots in the first half. The songs are catchy and well placed throughout the movie, to avoid boredom.

The soundtrack is amazing and Pakistanis have always excelled in this aspect. The title song is the first one to be shown in the movie and it literally comes out of no where to shake you up.

The Pakistani audience which is in dire need of a good rom-com will definitely love this fast paced movie. Balu Mahi is full of twists and turns, beautifully portraying the city of Lahore with bright vivid colors. Mahi is a somewhat relatable character, but unfortunately OKB’s Balu is not. February is the perfect month for this out-of-the-blue romantic tale and it will likely be a success. However, it may suffer due to the recent uplifting of the ban on Indian movies.

#Balumahi turns out to be an amazing film. Congratulations to the entire team.

Aside from the movie, the premiere was horribly mismanaged. The movie was only given 1 screen and people were almost stampeding to get seats. Ushers were even stopping the other major celebs who had been invited to the premiere from entering the theater. The lead cast arrived well past 9 PM, which is mostly because Ainy Jaffri was not feeling well enough. The movie started at 9.45 PM and most people left by intermission at 11 PM due to the media premiere being held on a weeknight.

Here are some pictures from the premiere:

Sadaf Kanwal dolled up in Sana Safinaz and makeup by Natasha

eem Farooq at the premiere of Balu Mahi with Shazz Khan

Syra Shehroze was also spotted at the premiere of Balu Mahi

What are your views? Let us know what you think of the movie at write@veryfilmi.com