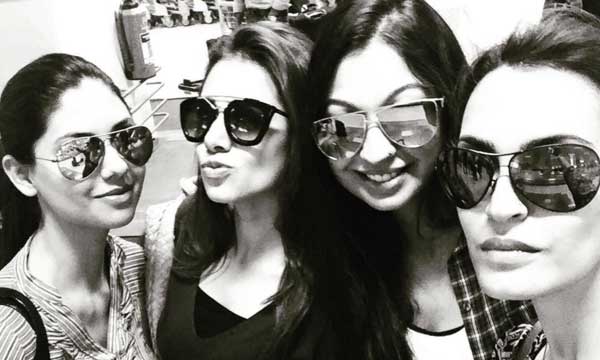 Pakistani models are not just at par but way better than any international star when it comes to killing it on social media. Leading supermodels, Tooba Siddiqui, Sunita Marshall, Nadia Hussain and Rubya Choudhry recently got together to create some funny dubsmash videos.

Have a look at the blast these girls had!

A hilarious Dubsmash of the Naz Pan Masala song performed by Tooba Siddiqui, Nadia Hussain and her friends.

Yet the fun is not over. Tooba Siddiqui posted another Dubsmash with her friends including Nadia Hussain, Asimyar and Sunita Marshall.

Have a look at how Pakistani celebrities enacted the Nagan Dance Bollywood flick.

Nagannnnnnn dance! Hahahahah yet another dubsmash

Here is another video:

Check out Tooba Siddiqui’s Dubsmash video with her little cousins in Nathia Gali.

Sometimes it’s fun being a kid 😍😎😎😎😎wid my lill teenage cuzions in nathia gali!!! ❤️❤️❤️❤️love u all

Tooba Siddiqui and Ali Kazmi shoots a Dubsmash on Yeh Dosti. It’s totally going to win your heart. Did u know that both these actors are being cast in ‘Dobara Phir Se’ which is an upcoming romantic Pakistani drama?

Yeh dosti hahahah all the way from newyork !!! Dubsmash#alikazmi#bike#ride#sholaystyle#swag#nyc#fun#offtime#break#shoot#funtimes#bestteam#friends @supakazz 😎😎😎😎 A video posted by Tooba Siddiqui (@toobasiddiquiofficial) on Sep 4, 2015 at 10:05am PDT

Check out the latest Dubsmash of Aisha Khan and Ahsan Khan. The admirable personalities entirely copied the famous dialogue of “Bin Roye’ movie.

Check another Dubsmash of Aisha and Ahsan, where they can be seen replicating flirtatious voice over their actions.

Aisha Khan is so much fun when it comes to Dubsmash. Have a look at her Ramleela Dubsmash