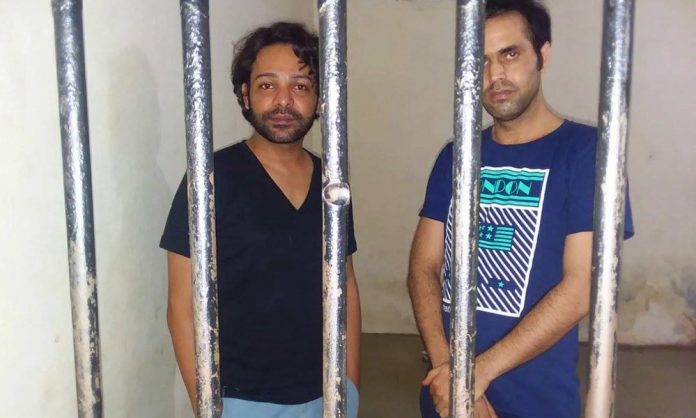 One of the popular Pakistani TV hosts Ali Saleem, most commonly known as Begum Nawazish Ali, has been arrested from a guest house located in DHA Phase 5.

According to Dunya News, the guest house was raided by police last night and alcohol was recovered from the room where Ali Saleem and his friend were staying.

Pictures of Ali along with his friend are now going viral on social media.

A case has been registered against both of them for alcohol possession.

This is not the first time the actor has been sent behind bars. A few years ago, he was jailed for torturing his mother Farzana at his residence in Bani Gala on a domestic dispute.

It was revealed that he had broken the nasal bone of his mother due to which she was admitted to Islamabad’s Polyclinic.

Apart from talk shows, he has also acted in a couple of Pakistani movies including Reema Khan’s Love Mein Ghum and Jawed Sheikh’s Wajood.

Ali Saleem has lately been out of the spotlight and has not signed any projects after Wajood. Till last year he was doing late night TV Talk shows on different news channels in Pakistan.

What are your views on the stories? Let us know in the comments section below.