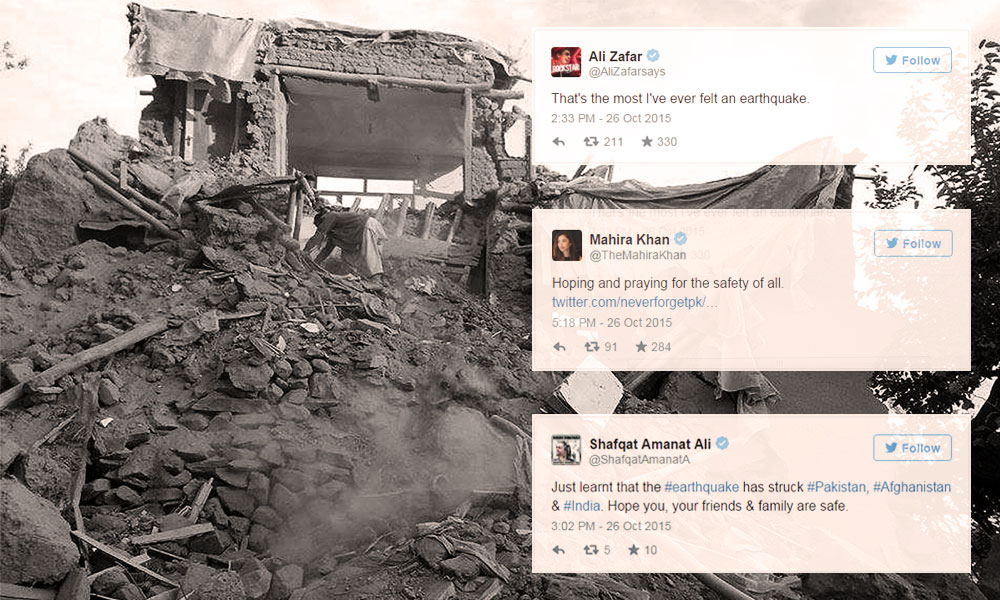 A massive earthquake of 7.7 magnitude struck cities of Pakistan consisting of northern areas of Punjab, Peshawar, remote areas of northern Afghanistan and parts of India on Monday afternoon around 2:00 pm, taking over 250 lives and injuring more than 1000 as a result of landslides, stampede and building collisions.

About half an hour after the first earthquake, a 4.8 magnitude aftershock also struck the same areas. The celebrities all over resorted to social media unfolding their personal experiences, praying for the quake victims and expressing gratitude for being alive.

President Narendra Modi expressed his concern for the quake victims and offered assistance where and when needed.

Heard about strong earthquake in Afghanistan-Pakistan region whose tremors have been felt in parts of India. I pray for everyone's safety.

Let’s have a look at a few facebook posts and tweets by our beloved Pakistani celebrities:

That's the most I've ever felt an earthquake.

Praying for everyone's safety after that earthquake just hit various parts of the region, be mindful of after shocks. #BeSafe

Hoping and praying for the safety of all. https://t.co/iJkJw9HyBm

I was at Peshawar stadium and feel the earthquake shakes. Dressing room cracks and the fear I feel I can't express.. pic.twitter.com/KSPtyzE0C1

Just learnt that the #earthquake has struck #Pakistan, #Afghanistan & #India. Hope you, your friends & family are safe.