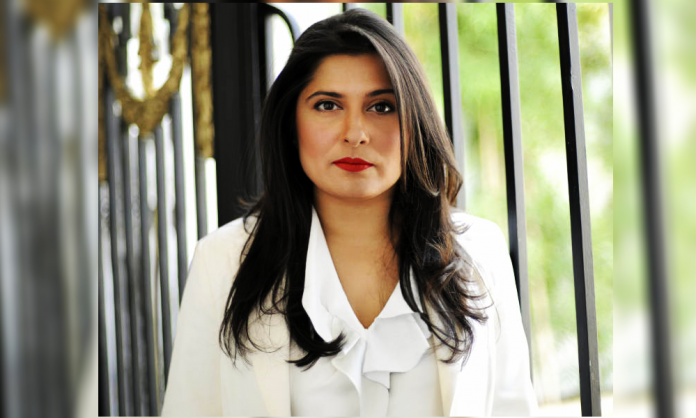 The revered award-winning director, Sharmeen Obaid Chinoy needs no introduction. She rose to fame with her ground-breaking documentaries on social issues prevailing in our nation and made us proud by being the first Pakistani to bring an Oscar home.

She is a strong advocate of women empowerment and is always taking to initiatives to promote the positive side of Pakistan.

However, she has found herself in the eye of a social media storm over a crucial matter that has Pakistan divided!

A couple of days back, Obaid took to Twitter, accusing a doctor employed at Agha Khan Hospital of committing “harassment” by sending a friend request to her sister.

There are zero boundaries in #pakistan! Last night my sister went to AKU emergency & the doctor who tended to her tried 2 add her on FB 1/2

Following the whole chaos, the doctor has now been fired from his job due to his involvement in the on-going controversy. 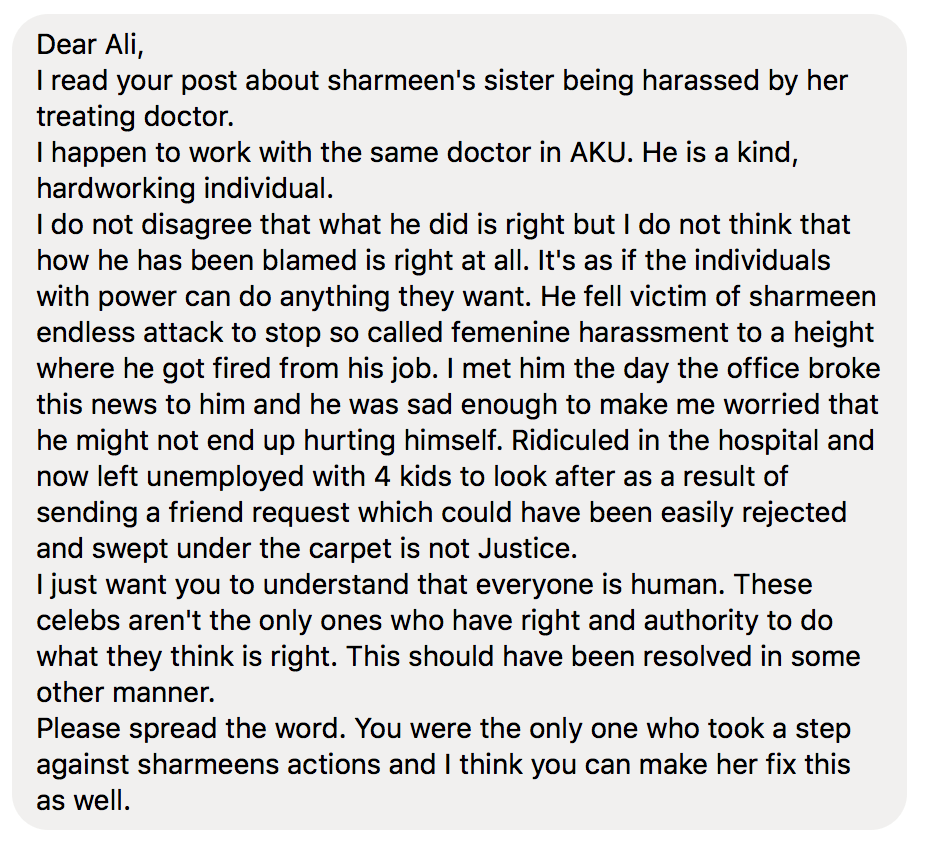 A way to protest. People have started rating AKUH poor in while trending #BringTheDoctorBack. Ratings down from 4 to 2.7 in a day. pic.twitter.com/aMVjRJEOiq

@sharmeenochinoy has gone mad after the stolen oscar and the fame came with it. Bitch! #BringTheDoctorBack

Agha Khan University Hospital finally responded with a statement about the whole episode!

Major Revelations About the Doctor!

Meesha Shafi’s tweets on the matter reveal that the doctor was already under scrutiny for various other cases of harassment.

it’s safe to say @sharmeenochinoy absolutely does NOT need to seek attention or publicity. Or any validation!!! https://t.co/tJDN0adhAV

Various other tweets by journalists too accused him of various misdeeds.

Also just so you know pic.twitter.com/9weWEUoC51

Ali Moeen Nawazish was the first to share his two cents on the matter, claiming that she has the word ‘harassment’ a little too carelessly.

Now that the issue has ballooned up, even celebrities have joined in the debate on social media!

Comedian, Syed Shafaat Ali penned down a strong note to Sharmeen about the whole fiasco!

Fatima Effendi too slammed Obaid for her idea of ‘harassment’

Ok so on one hand you have spent your entire life making documentaries on the conservative aspects of Pakistan and getting awards for doing something anyone who is not patriotic at all could have done. And now when you face some liberalism you start crying..what kind of drama is this? If sending a friend request is equal to raping then missy sorry to tell you that you have been raped by all the men on your facebook friend list and all the people following you on twitter. Condolences!

Of course, Waqar Zaka too could not stay silent on the matter!

Chachi botox @sharmeenochinoy u misused celeb power, that DR. Losing his job is Harrasment, I will make sure he gets a better job.

#ChachiBotoxMurdabaad @sharmeenochinoy DR. Should get his job back AKU hospital.

We all were waiting for Hamza Ali Abbasi to break silence on this topic and he finally did!

Meanwhile, Mubasher Lucman is all ready to help the doctor get a new job!

Does anyone here have details of the Doctor who got fired from Agha Khan?? Please share his details with me. Thank you

Designer Nomi Ansari too is not happy with Sharmeen!

Use your power for a cause and handle your fame well.

But Ushna Shah is rooting for the documentarian and believes she is right!

When a woman goes to a male doctor, especially in Pakistan- she is blindly trusting and hoping against hope that when he…

reporting unprofessionalism which lead 2 HOSPITAL firing employee as per THEIR policy is the woman’s fault 4 not staying quiet? #aku

And now Veena Malik has been spotted trolling Obaid!

No….
he didn’t want to mess with a fat woman😂😂😂
As per her own statement…!!! https://t.co/rtLEKzhNNC

Let’s see what Sharmeen will reply to all the backlash!