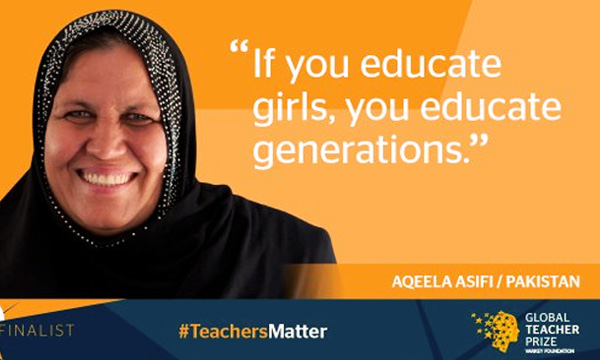 A woman who has dedicated her life to educating Afghan refugee girls in Pakistan, challenging cultural sexism by setting up classes in a makeshift tent, has been shortlisted for a $1 million Global Teacher Prize given annually by the Varkey Foundation.

Aqeela Asifi, 49, left Kabul with her family in 1992, and ended up living in the remote refugee settlement of Kot Chandna in the Punjab region of Pakistan, where most girls were excluded from the classroom.

Asifi set up a school in a borrowed tent and worked hard to overcome resistance and negative attitudes. Twenty families agreed to their daughters being educated and Asifi initially focused on teaching non-controversial subjects such as personal hygiene, home management skills and religious education.

After gaining the trust of the community, Asifi was able to introduce literacy, Dari language, mathematics, geography and history. There was no money for resources like blackboards so Asifi stitched pieces of cloth with handwritten text to the tent walls and wrote books by hand at night. Her students traced their first words in dust on the floor.

Today, there are nine schools in the camp with many female teachers and over 1,500 students including 900 girls. With education, early and forced marriages in the community have declined.

Asifi was presented with the UNHCR’s Nansen Refugee Award in 2015.