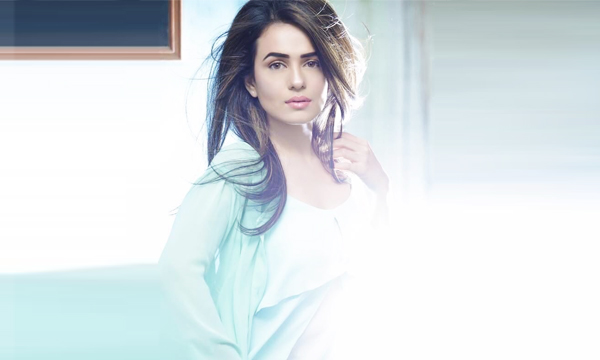 Pakistani actress Sumbul Iqbal may be the perfect example of ‘the damsel in distress’ of the Pakistani entertainment fraternity, but the actress is now trying something new, and that too in Bollywood! Yes, you heard it right, the starlet will be ditching her girl next door avatar and will be seen in a chic and sultry look for her Bollywood debut movie.

The untitled Bollywood flick will be marking the actress’ debut movie ever. The role will also let her explore new horizons and diversify her talent as an actress. The first look shows Sumbul in a refreshing avatar- donning a semi-off shoulder top and ripped jeans, the actress totally rocks the look.

Revealing to you the complete look of #SumbulIqbal from her debut film! The actress will be seen in a contemporary role. Here she's styled by @anilamurtaza and shot by @akifilyasofficial! 😍🔥😍

Sumbul was totally excited about her role and the big Bollywood break. While talking to a local entertainment website the actress reveals; “Well the character that I play is of a very lively, educated girl and as far as her outlook is concerned, my character will sport western clothing,” she said. “Even though my character is of a modern, trendy woman, and the film is a light-hearted commercial film; there’s nothing vulgar in it at all [as is the common belief in our serials].”

“In drama serials, I never got an opportunity to test my range, and with this movie, I’m heading out of my comfort zone and venturing into something I’ve never done so far,” Sumbul said.

The ‘Mere Khuab Reza Reza’ actress revealed that even though she managed to get the lead role in the commercial flick but she knows her restrictions and limitations as a Pakistani artist. “The character and the script made me sign the film. I wanted to do something different,” Sumbul pronounced. “Everybody, who has crossed the border, is doing exceptional work. Fawad Khan, Mawra Hocane, Mahira Khan; all of them. I think, if given the right opportunity and a good and respectable role, that respects one’s [moral] boundaries, then I think there’s nothing wrong in representing and promoting your own country’s talent on bigger platforms.”

The movie shoot will start in February 2017 while the official announcement will be made by next month.