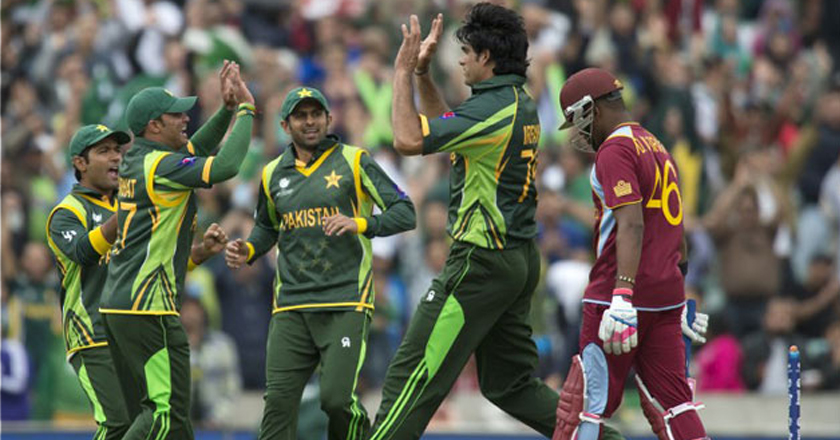 In one of the most morale-damaging defeats suffered by Pakistan over the years, the recent loss against India stands out head and shoulders above the rest.

The Pakistani team huffed and puffed, but eventually succumbed to the weight of high expectations that rested precariously on the shoulders of the men in green.

However, the entire nation stands behind the boys, and up next for them are the men from the Caribbean, the Maroon Army – West Indies.

Fresh from facing defeats in their opening matches, the two fallen giants of the game would feel the need to right some wrongs in this crucial Pool B group match.

Watch all the action live from the Hagley Oval in Christchurch, New Zealand, on PTV Sports and Ten Sports on Saturday, 21st February, 2015, at 03:00 AM (Pakistan Standard Time).

Pakistan and West Indies first met in a competitive ODI match in June, 1975. Since then, the two sides have played out 126 matches, with the W-Indies winning 68, and the Pakistanis winning 55 of those encounters. Pakistan won the last match between these two sides in July, 2013 in St. Lucia.

With his calm influence and silent assassin skills, the Pakistani captain is a one-man army at the moment. His key decision making ability during the team’s fielding, and his composed batting, Misbah-ul-Haq is a man who seems to get better with age.

The man-in-form, Ahmed Shahzad, with his flashy drives and sweet slogs, is a joy to witness. His love for his country is perfectly epitomized with his no-nonsense, athletic fielding and his ability to provide a stable platform with his responsible opening batting.

This man has an unbelievable story. Not selected in the final 30 team members for the World Cup, but selected in the final 15, Sohail Khan made a dream start to his Pakistani career against arch-rivals India, taking five crucial wickets when the team needed him most. His fast swing bowling will be a threat for the West Indian batting line-up.

Fresh from making an emphatic 89 against Ireland in their first WC match, West Indian captain and all-rounder, Darren Sammy is a man for the big moments. His explosive batting and effective medium-pace bowling will be a major threat to the Pakistani cause.

The beast, that is Chris Gayle, requires no introduction. His batting comprises of master strokes that the game’s greatest players would be proud of. Currently out of form, the match against Pakistan will test his resolve and character as a true great of the game.

The team winning the toss is likely to elect to bat first, and put a load of runs on the board. This is the same ground New Zealand beat Sri Lanka at in the first match of the tournament, posting a score of 331/6 in the allotted 50 overs.

With the explosive batting line up of the West Indies and the technically gifted bowling attack of the Pakistanis, we can expect a tough battle of wits. The stakes are high, and the teams are prepared. But beware, this is a game neither team can afford to lose.