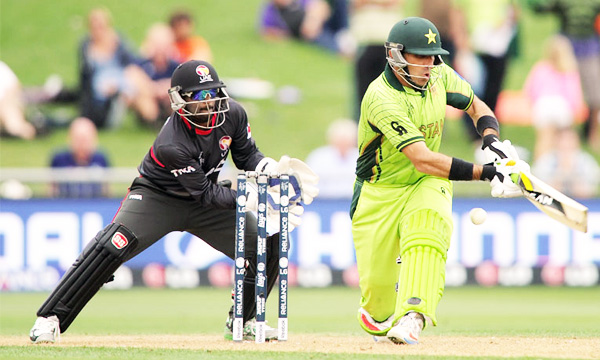 UPDATE: Shoaib Malik and Umar Akmal each scored a half-century as Pakistan survived an early innings jitters to beat the United Arab Emirates (UAE) by seven wickets in the Asia Cup in Dhaka on Monday.

Set a modest target after their  bowlers had restricted the UAE to 129-6, Pakistan lost three wickets in 17 runs before Malik and Akmal saw them home with solid batting.

Malik made 63 off 49 balls while Akmal added 50 off 46 balls as the pair added 114 runs for the unbroken fourth wicket partnership to steer Pakistan to 131-3 with eight balls to spare.

UAE captain Amjad Javed took all three Pakistan wickets as he trapped Sharjeel Khan leg-before for four before inducing an edge from Khurram Manzoor’s bat for a duck in his first over.

Pakistan was in danger when Mohammad Hafeez gave a catch to Fahad Tariq at cover for 11 in Javed’s next over.

But Malik and Akmal staved off a further collapse with some cautious batting mixed with calculated aggression.

“We all know the first six overs have been crucial. If you survive, then you can play shots and that is what we did,” said the man of the match Malik, who hit seven fours and three sixes.

“We lost early wickets but then we decided to forget about the run rate and focus on playing out the first six overs.

“We bowled well in the first six overs but then we were a bit all over the place, hopefully, we will talk about it.”

Shaiman Anwar made 46 off 42 balls for the UAE after the minnows suffered a similar collapse at the start of their innings.

Pakistan’s pace bowling trio of Mohammad Amir, Mohammad Sami and Mohammad Irfan each claimed a wicket apiece in their respective first spell to leave the UAE struggling with 12-3.

Anwar then launched a counter attack, first hitting debutant Mohammad Nawaz for a six and a four and then dispatching three successive deliveries of Afridi for fours.

Irfan dismissed Anwar to finish with 2-30. Amir finished with 2-6 after he bowled Mohammad Usman out for 21.

Skipper Javed remained unbeaten on 27 to give the UAE a fighting chance against the former World Twenty20 champions.

But Javed ruled a lost opportunity.

“We knew it would be difficult to chase, we got some early wickets, but we could not capitalise on that.”

Pakistan is all set to face the United Arab Emirates (UAE) today in the ongoing Asia Cup T20 2016 at Shere Bangla National Stadium in Mirpur; the match is the sixth match of the innings starting at 6.30 PST today, 29th February.

The men in green are quite excited to clinch their first victory of the tournament today, especially after the terrible loss to the arch-enemies India, being beaten by 5 wickets on 27th of February.

The most disappointing thing about Pakistan was their batting line that suffered against the Indian fast bowlers; many batsmen fell behind because of the lose shots. This has become a shortcoming for the Pakistani batting line. Shahid Afridi is expected to get back into form against the weaker side, UAE.

Talking about the talented batsmen in both the teams, Mohammad Hafeez has played in 72 T20 matches until now and has made 1518 runs. Pakistan captain Shahid Afridi is expected to perform well in this match; however, the UAE captain Amjad Javed can also give tough competition.

Pakistan’s face paced bowler Mohammad Amir is looking forward to stun the UAE team; however UAE are hopeful regarding Mohammad Naveed who sent 19 players in 12 T20 matches to the pavilion.

In the India vs PakistanT20 Final, it was the bowling side that did exceptionally well, especially Mohammad Amir’s spell and Mohammad Sami’s beautiful bowling; Irfan and Wahab Riaz were also great support.

UAE has lost both of their previous games in the Asia Cup; therefore today’s match will be a ‘make or break’ for the team if they wish to stay in the tournament.