Home Pakistan Pakistan Vs India Twitter War on #SurgicalStrike: Tweets that Will Make You...
Advertisement 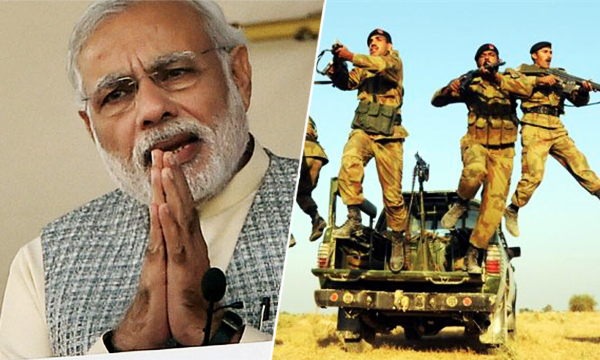 The Indian army has confirmed conducting surgical strikes across the Line of Control (LoC) on Wednesday night at Azad Kashmir. As part of the social humor, Pakistani and Indian citizens initiated a Twitter war, flooding social media altogether, expressing their views and opinions on the issue.

Many Pakistani and Indian celebrities and journalists were also part of the twitter war!

Indian Twitterati rejoiced, and started congratulating PMO Narendra Modi for responding to the Uri attack. Pakistanis did not back down and began trolling the Indian Army over the so-called ‘operation’.

Here is how Twitterati reacted to the Indian Army’s surgical strike:

Some of the Pakistani tweets are totally hilarious!

Koi mujhe bi utha deta. Wo surgical strike kar ke chalay bi gaye and I slept through it all.

I can forget anything but trust me i can never forget this, i am the witness, watched it live !!! pic.twitter.com/cUSK3qw6Zh

Just finished a #SurgicalStrike on my Khao Suey B-) pic.twitter.com/WEcslUQCWm

An other clip surfaced, see how Coward Indian Soldiers are being Targeted in their vallation.#SurgicalStrike 😂😂pic.twitter.com/LYSBL5BkGf"

This is how Pak Army respond to Indian barking dogs without crossing the LOC. #SurgicalStrike pic.twitter.com/v1wy6BqXUF

These food references will definitely make you LOL!

Just carried out a surgical strike on beef biryani. What about you?

And I carried out surgical strike on chicken biryani and kababs as well. 😋 https://t.co/1OyXV4MS43

Just about to carry out a celebratory surgical strike on a beef burger today. https://t.co/uHDdU5T66M

Suggest the next target for my night surgical attack, anyone? 😎

Some were really creative &totally on-point!

What do you call an Indian General?
Syapa salaar 😆

India is behaving like a student who cheated in exam & got busted but don't wanna admit it.

Lol okay😄😄😄
I was playing cricket, mistakenly my ball went to my neighbor's house.Called it #SurgicalStrike
okay india 😄😄😄#ChakDeIndia

The only attack in the world when you need to call the enemy to tell them, that you attacked them#SurgicalStrike

Come Its just a starter,wait for the main dish ,where are the #Indians & why they didn't attend Flag ceremony at Wahga?#SurgicalStrike pic.twitter.com/b6SleDAWx3

#SurgicalStrike #COAS Warns #India to Don’t Mess with Pakistan Army or u ill be Erased from Map of the World. pic.twitter.com/E13NxfcVOE

There was no #SurgicalStrike by India on Pakistani Soil, they cannot dare to think of doing that knowing possible response from our Military

Indians, on the other hand, rejoiced and congratulated Modi as if they had won a war!

Fascinating.. The more you heard or read about Planning & Preparation for this #SurgicalStrike , the more it amazes.. Hats off to India Army

Salute to Indian Army for the successful #SurgicalStrike. Congratulations to Hon'ble PM Shri @narendramodi ji for this determined action…

They send 4 suicidal terrorist and killed 17 we killed 35 terrorist without a scratch . This is indian Army #SurgicalStrike

So proud of what our #IndianArmy did today. Tit For Tat! Heart goes out to the Soldiers who've lost their lives for us. #SurgicalStrike 🇮🇳

While some Indians were not at all happy with the #surgicalstrike

All the pieces about #SurgicalStrike are saying a whole lot to nothing. Am so pleased source journalism fell flat on its face on this one.