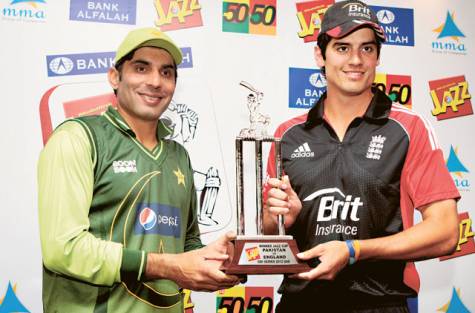 Pakistan and England will be aiming to build one-day sides for the future as they enter a four-match series in Abu Dhabi starting on Wednesday.

Pakistan, who won the preceding three-match Test series 2-0, will be in a tight corner as they seek huge improvement in their one-day rankings, in order to lift themselves for the 2019 World Cup to be held in England.

Besides hosts England, seven other top-ranked sides as of 30 September 2017, will qualify directly for the World Cup, the only way Pakistan can move up the order is by winning matches against the higher-ranked sides.

Pakistan, currently ranked eighth as compared to England’s sixth, will be hoping they do not repeat their below-par performances they gave in 2012 when they were blanked 4-0 in the United Arab Emirates.

Head coach Waqar Younis believes the current series is an important one for Pakistan.

“We know the importance of this series and have to do well to build the side for the future, especially with the Champions Trophy 2017, rankings and the 2019 World Cup all in the mind,” said Waqar.

Under Waqar Pakistan had struggled in the 50-over format, losing to Sri Lanka, Australia and New Zealand last year before going down in New Zealand and failing to progress beyond the last eight in the 2015 World Cup.

But the worst came in Bangladesh where Pakistan were routed 3-0 in April — their first series defeat against the neighbours.

Since then Pakistan beat Zimbabwe twice (home and away) and Sri Lanka — a progress Waqar wants to build on.

“We have shown progress with some exciting youngsters,” said Waqar, whose team lost Misbah-ul-Haq and Shahid Afridi after the World Cup 2015 due to retirement.

Ace spinner Saeed Ajmal is also not in the squad after struggling with a new bowling action, which needed remodelling after it was questioned last year.

His place went to leg-spinner Yasir Shah who will hope to carry his Test form, taking 15 wickets in two matches, into one-days.

Waqar said one-day cricket has changed and England have adopted to those admirably.

“One-day cricket has changed and now even a 300-plus total is not safe which England have adopted and are a dangerous side,” said Waqar.

To their credit, England have shown remarkable progress after being the only top side not to reach the 2015 World Cup quarter-finals.

England beat the 2015 World Cup finalists New Zealand 3-2 before going down fighting 2-3 against Australia — both at home.

England media reported some players are training under a baseball expert Julian Wood in order to develop more hitting techniques.

“Julian has worked with us before, done a really good job,” Flower was quoted as saying by Sky Sports. “Part of our job is to offer options to players and they make decisions about whether they want to adopt things.”

Both Pakistan and England tuned up for the one-day series with comfortable warm-up wins against Nepal and Hong Kong respectively.

The remaining matches will be held in Abu Dhabi (November 13), Sharjah (November 17) and Dubai (November 20).