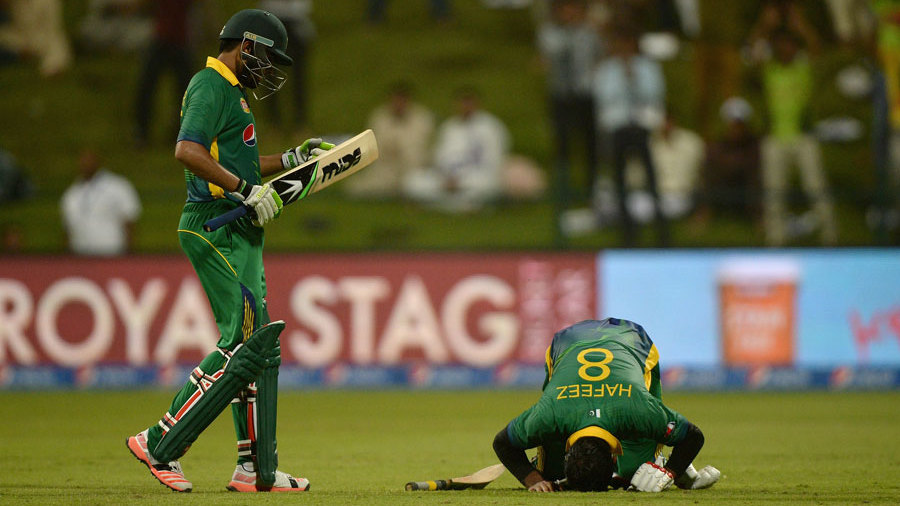 Pakistan and England cricket teams are facing off each other in the first ODI of the four-match series at Sheikh Zayed Staudim, Abu Dhabi today

The morale of Pakistani camp is high after having won the test series that will give them psychological edge over their opponents. However, currently ranked at number 8, Pakistan seeks improvement in ODI ranking to directly qualify for the ICC World Cup 2019 and despite their good performance in UAE in tests, green shirts have lost last eight out of ten ODI series they played here. Last time in 2012, Pakistan had to face a humiliating defeat against England in ODI series by 4-0 on the same venues and skipper Azhar Ali is determined for the better result this time. Hafeez’s ton (102*) and Babar Azam’s (62*) guided Pakistan to a six-wicket comprehensive victory with 6.2 overs to spare. The centurion Hafeez was awarded Man of the Match award. Picture of the Day-Younis Khan (The Legend) Pakistan also lost both openers Azhar ALi and Bilal Asif  in no time (15-2 in 3.2 overs), and Younis Khan who is playing his last ODI, is on the crease with Mohamamad Hafeez. England got all out on 216 and set an easy target to chase for Pakistan, Irfan was the most successful bowler with 35/3 in his ten overs. Wickets falling in quick succession, Babar Azam just caught a stunner to sent Moeen Ali back to the pavilion. (161-7) Morgan pacing up momentum nicely, Taylor supporting the skipper from the other end. Pakistan got three early wickets within first four overs  (14/3 in 3.1 overs) but England controlled the damage, Captain Morgan leading from the front.