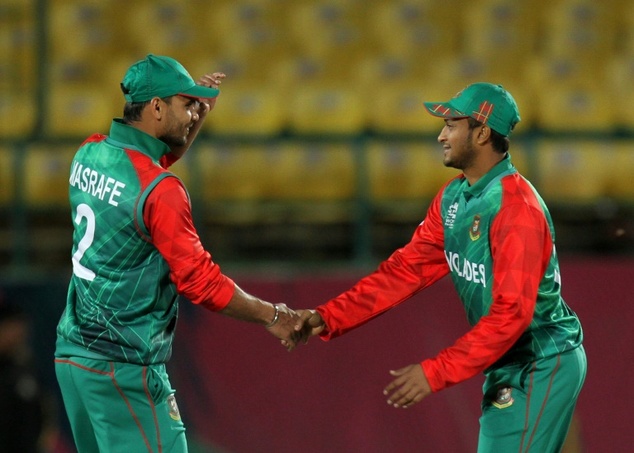 UPDATE: Pakistan thrashed Bangladesh by 55 runs on Wednesday in their opening match of cricket’s World Twenty20, with skipper Shahid Afridi starring with bat and ball at Kolkata’s Eden Gardens stadium.

Afridi scored a blistering 49 off just 19 balls in Pakistan‘s commanding total of 201 for five before then taking two wickets, including that of danger man Tamim Iqbal, as Bangladesh made 146 for six in their 20 overs.

Scoreboard of the World Twenty20 match between Bangladesh and Pakistan at Edens Gardens in Kolkata on Wednesday:

At 26/1, Pakistan loses first wicket in the form of Sharjeel, getting bowled. Pakistan won the toss and chose to bat first against Bangladesh in their opening match of the World Twenty20 in Kolkata Wednesday.

Opener Ahmed Shehzad was recalled to the starting line-up after missing the recent Asia Cup for alleged disciplinary reasons.

Bangladesh made just one change from their defeat to India in the Asia Cup final, with Abu Hider making way for Arafat Sunny.

Bangladesh will look to compound the misery of beleaguered Pakistan Wednesday in their opening group match of the World Twenty20, fresh from humbling their arch-rivals in the Asia Cup.

See all the latest updates from the match below:

Bangladesh cruised through last week’s preliminary round and know that a victory over Pakistan will set them up nicely if they are to make the semi-finals for the first time. Despite their recent improvements in 50-over cricket, Bangladesh has a rotten record in the World T20 and have never beaten Pakistan in the premier tournament of cricket’s shortest format.

But they will fancy their chances like never before at Kolkata’s Eden Gardens against a team who are on a miserable run and whose preparations have been hit by their late arrival in India in a row over security.

Star batsman Tamim Iqbal is in the form of his life, scoring Bangladesh’s first ever international T20 century in Sunday’s victory over Oman after scores of 83 and 47 in the first two games.

Fans in the cricket-mad nation held impromptu street parties earlier this month when Bangladesh clinched a five-wicket win over Pakistan in Dhaka, sealing a place in the final of the Asia Cup which they lost to India.

Bangladesh was part of Pakistan before a brutal 1971 war of separation, and matches between the sides therefore always have an extra edge to them. Mashrafe Mortaza’s side can expect strong support from their fellow Bengalis in what is the capital of the Indian state of West Bengal.

But Afridi said Pakistan had a good record at Eden Gardens, including a convincing victory over India in an ODI in January 2013. “We have very good memories over here and we are pretty much confident,” he told reporters in Kolkata. Afridi landed himself in hot water at the weekend when he said he had received more “love” from fans in India than back home, comments that incensed former Pakistan skipper Javed Miandad.

Bangladesh’s build-up has been serene in comparison. But after seeing off Oman, the Netherlands and Ireland in the preliminaries, Mortaza knows the hard work now begins in a group that includes India, Australia and New Zealand.

“In that group you can’t make any mistakes, you have to be up to the mark everywhere,” said the veteran bowler.