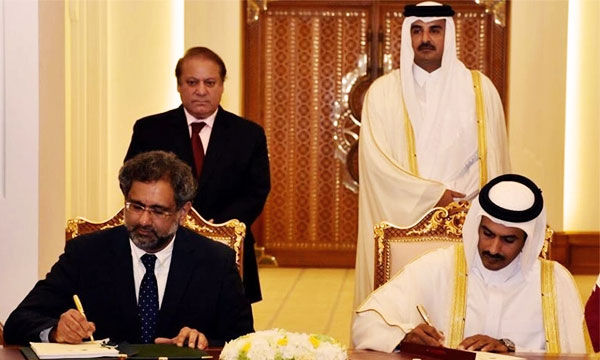 Prime Minister Nawaz Sharif has signed a long-term deal in Doha yesterday for the liquefied natural gas (LNG) supply on his two-day visit to the Middle Eastern country.

Chairman of Qatar Gas Board of Directors Saad Sherida Al-Kaabi and Federal Minister for Petroleum and Natural Resources, Shahid Khaqan Abbasi signed the agreement at Diwan-e-Emiri according to which Pakistan will be provided LNG worth $1 billion. Pakistan State Oil will be sold LNG by the Qatar Liquefied Gas Company Limited from 2016 to 2031. The quantity to be provided annually has been mutually agreed upon as a prorate of 2.25 metric tonne whereas 13.37% of Brent will be paid as the price of each cargo.

Abbasi also mentioned that for the best prices Pakistan will receive almost 35 million tonnes of LNG to curb the energy crisis in the country.

“The import of gas will also help start production of at least 2,000 megawatts of electricity from powerhouses that are currently non-operational,” said Abbasi.

PSO  was given the go-ahead by Economic Coordination Committee (ECC) for PSO to sign the LNG Sale Purchase Agreement (LSPA) with Qatargas.