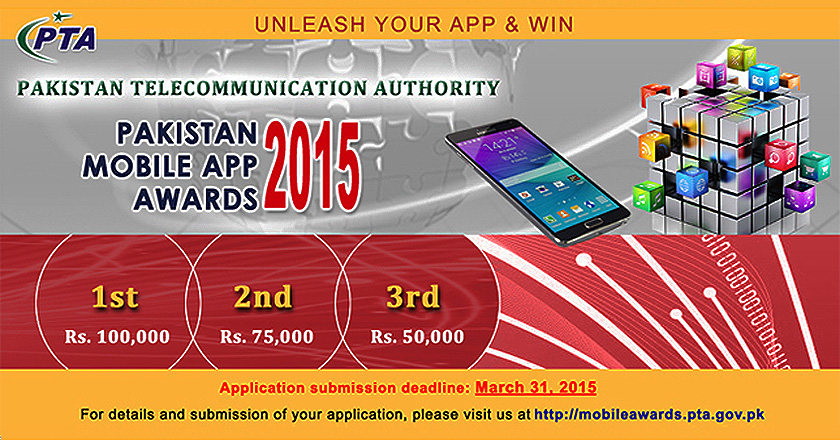 Pakistan Telecommunication Authority (PTA) hosted the ‘Pakistan Mobile App Awards 2015’ in which cash prizes were awarded to the winners.

The ceremony was held at a local hotel in Islamabad where Ms. Anusha Rahman Khan, the Federal Minister of State for IT and Telecom presented the awards to winners.

Ms. Anusha Rahman Khan addressed the ceremony by praising the proactive approach taken by PTA for initiating such a competition. She said that this example should be followed by the telecom industry chiefly the operators which can reap maximum benefit for both the industry and the young innovators along with promoting innovative development.

She praised the young innovators and encouraged them along with announcing some new projects being started. She stated:

“We are working for the development of telecom sector on priority basis. The revenue of telecom sector will reach Rs. 800 Billion in next 5 years, whereas til year 2020 this revenue is expected to reach 4 billion dollars.”

“Government of Pakistan is also establishing telecentres in different areas of the country especially in rural areas. This year 2015 is also declared the year of IT. We are starting 9 IT projects of 20 Billion in Khyber Pakhtoonkhwa and Balochistan.”

“We at PTA believe in harmonized efforts for the uplift of ICT Industry of Pakistan as we look forward to carrying out significant projects in partnership with the operators and solution providers in the future as well. The Pakistan Mobile App Awards is to bridge the gap between industry, academia and the regulator.”

A total of 100 applications were received for the competition. The procedure of marking was employed for the evaluation of the received apps by a committee comprising of IT and software experts. The categories were kids, entertainment, security, agriculture, community and business.

All entries for the competition were evaluated on a pre-defined standards which included functionalities, value to the public, uniqueness, quality and sustainability of the app. The awards were presented in two broad categories:

2nd position was awarded to Mr. Waqas Jamal and his team, students of Military College of Signals, for developing the app ‘Catch the BUS’.

1st position was awarded to Mr. Hassan Baig and his team for developing the app ‘Internet Tutor’.

2nd position was awarded to Dr. Hammad M. Cheema and his team for developing the security app ‘OMNES’.

Mr. Shahryar Khan and Mr. Iram Tariq Bhatti were also appreciated and awarded in recognition of their international level achievements.

The future seems bright for the Pakistani app developers as more and more efforts are being made, to hone their skills by Government, as well as private organizations.