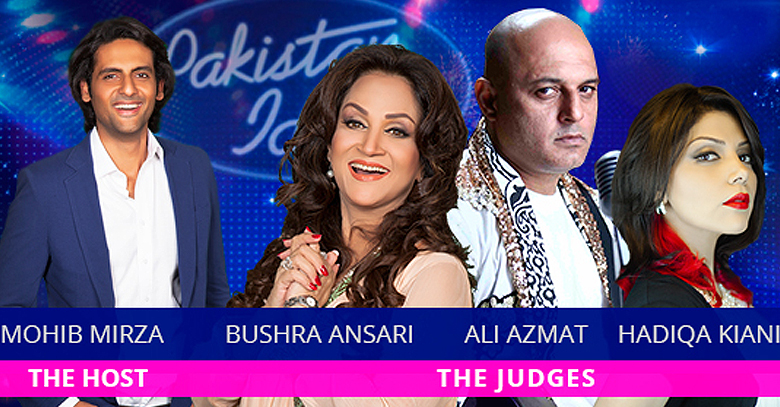 Pakistan idol is finally here and ready to take the center stage on GEO television from 6th Decmber.

Pakistan Idol aims to promote amateur singers and to take them to a world of fame and glory that they’ve always dreamt of. The show is set to be a hit among the local and international audience as they look forward to a drama-filled journey of talented hopefuls from day one to the finale.

Hosted by the very talented Mohib Mirza who is well known for his diverse acting styles, his presence is set to take the show to new heights as many hope to see their favorite actor in a role such as this.

Judges however are an interesting blend of the industry from the impeccable comic timing of Bushra Ansari to a basket of talent from Hadiqa Kiani and the ever so electrifying Ali Azmat, this panel will surely give the contestants a run for their money and offer entertainment that this show promises to its viewers.

Sponsored by Clear, QMobile, Pepsi and Mobilink the show is a project of FremantleMedia enterprises and will be aired live on Geo across the country in the coming days.

With an incredible 460 million viewers in over 150 countries worldwide the ‘Idol” franchise is the biggest Star maker reality show which is now ready to hit the television sets in Pakistan.

The timing couldn’t have been more perfect as the music industry seems to be on high in the country with several projects like the Nescafé basement and Coke Studio season 6 being aired on various channels.

Are you guys looking forward to Pakistan Idol?