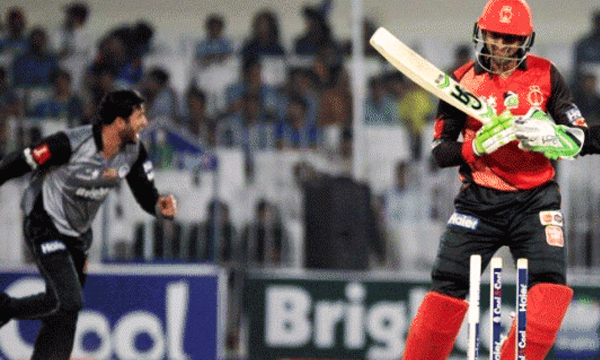 UPDATE: KPK XI after a close match, managed to win by just 2 runs in the end. Playing first after wining the toss, KPK team scored 262/6 of their 50 overs. In reply, Punjab XI ended just 2 runs short at 260/7 in a match that was looking to be in their favor.

KPK XI again got a sold start by Fakhar Zaman(64) and Ahmed Shahzad (57) followed by the valuable support from middle order batsmen. Rameez Aziz (35), Zohaib Khan 51* not out and Bismillah Khan with his 33 runs played their part in taking up the team total to 262/6. Aamir Yamin and Zulfiqar Babar took two wickets each.

Chasing 263 runs, Punjab XI was almost going over the line easily, but stopped by Rahat Ali’s bowling in the death overs. Opener Salman Butt was the top scorer with his 77 runs.  Asad Shafiq, captain Shoaib Malik, Mohammad Rizwan took the responsibility and all scored 40+ runs, 47, 41 and 47 runs respectively but could not prove enough for their side.

Rahat Ali was the rewarded with Man of the Match Award for dismissing four batsmen (10-1-42-4). Punjab and Khyber Pakhtunkhwa (KPK) teams will battle hard today for their 1st victory in the 4th match of Pakistan Cup 2016 being played at Iqbal Stadium, Faisalabad.

Both teams have played one match each but could not win  despite reasonably good performance. Punjab’s batting order has to click to win this match and the side needs a good show from seniors Shoaib Malik and Salman Butt. In bowling, they gave a pretty decent performance in the last match by restricting Balochistan to 215. Khyber Pakhtunkhwa is relying much on Younis Khan, but it is 50 over format and the rest of the batsmen must score runs with the captain. Although they gave tough time to Islamabad in chase of 212 runs, they need more wicket taking bowlers to dismiss the opposition.

There is no chance of rain predicted for today, hence the crowd reaching today will be much relieved. The momentum is building up especially by yesterday’s 260+ runs by Sindh, and we can anticipate more fireworks today in Iqbal Stadium Faisalabad.

The match commenced at 3PM local time and would be telecasted live via PTV Sports, the official broadcaster of Cool & Cool Pakistan Cup 2016 co-sponsored by Haier.