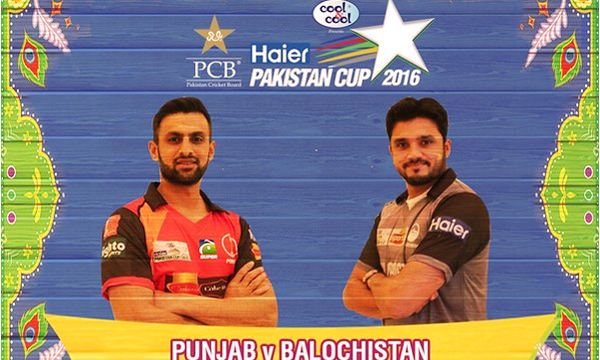 Balochistan bowlers made it difficult for Punjab team right from the start and in the end managed to bowled them out just 12 runs short. Umar Gul and Azhar Ali proved the real stars for Balochistan; picking up three wickets each.

Middle order batsmen of Punjab Asad Shafiq and Mohammad Rizwan put up a resistance by scoring 33 and 39 runs repsectively, but was not quite enough for the successful run chase. In the end Amad But with his 33* runs unbeaten knock kept the hopes alive for Punjab, but Zulfiqar Babar and Ehsan Adil got dismissed on the other end. Azhar Ali was declared Man of the Match.

Balochistan XI has been bowled out on 215 in 46.2 overs after been put into bat by Punjab’s XI captain Shoaib Malik who won the toss.

View the live score of Punjab vs Balochistan Pakistan Cup 2016 below:
Your browser does not diplay iFrames

Shahid Yousaf (49), Umar Akmal (47) and Babar Azam (41) were top scorers from Balochistan and managed to take the total past 200 runs. It was a combine effort by Punjab bowlers Shoaib Malik, Amad Butt, Zulfiqar Babar, Aamer Yamin and Ehsan Adil who got two wickets each that restricted Balochistan team at 215.

The opening match of the domestic one-day tournament ‘Pakistan Cup 2016’ is to be played today between Punjab and Balochistan at 3.00 pm- Iqbal Stadium, Faisalabad.

Following a pattern similar to the inaugural PSL T20 2016, this one-day championship is a great opportunity for emerging talents to perform at the domestic level and make their way to the national side. The tournament will also help improve domestic cricket in Pakistan and a great chance for selectors to weigh up the potential of national cricketers. Five teams will contest for the title, that are Punjab, Sindh, Khyber Pakhtunkhwa, Balochistan and Islamabad led by Shoaib Malik, Sarfraz Ahmad, Younis Khan, Azhar Ali and Misbah ul Haq respectively; all experienced skippers and have led the national team of Pakistan.

All 11 matches including the final on 1st May, Sunday, will be played at Iqbal Stadium, Faisalabad and will start at 3PM local time. Cool & Cool and Haier are the official sponsors of Pakistan Cup 2016. The cricket lovers in Faisalabad aka Manchester of Pakistan, are super excited to see the live action and so do the players who are fully charged to give up the best performance on the ground.

PCB has fixed the ticket rates ranging from Rs. 100 to Rs. 200 of all matches so that majority can see the live cricket action in Iqbal Stadium.