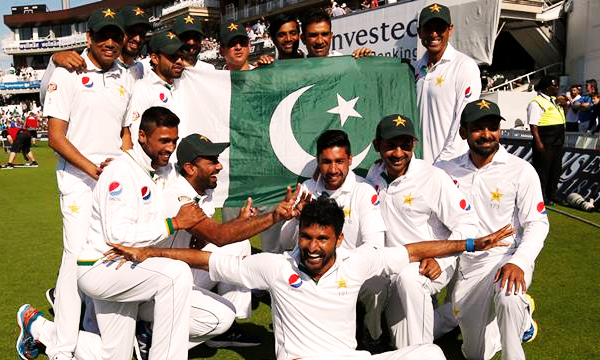 Pakistan Test Team now ranks no.1 on the ICC Test Rankings for the first time since 2003, when the official system of ranking was introduced, 13 years back.

Love them or hate them, but you cannot live without appreciating them. Be it a cricket fanatic or a regular person, everyone is head over heels over Pakistan team’s miracle achievement today. India was holding the number one rank at ICC test team rankings chart, and had to win the ongoing test series against West Indies at 3-0 to maintain that standing. After the first 3 test matches, however, leading with 2-0, the Indian team had to face bad weather in Spain for 4 out of 5 test days.

This meant that it was ultimately not at all possible for the Indian team to bowl against the opposition team, leaving Pakistan to take the top spot.

Pakistan Test side is still to play a game at the home ground since seven years and the fans just could not help but celebrate this memorable moment on social media.

On top of the world. Everyone is welcome to hop on the bandwagon inc the skeptics #PakistanNumberOneinTestCricket pic.twitter.com/ErPq31TptW

Congrats Team Pakistan! You are #1 Test team in the world. Now go forth and defeat England in ODIs!

WE ARE THE BEST IN THE WORLD!#ISLU congratulates #TeamMisbah on becoming the no.1 ranked Test team in the world pic.twitter.com/sSprlv4vNh

Whitewash Eng ✅
Whitewash Aus ✅
Draw 2-2 in Eng ✅
Test #1 ✅
India? Too scared to play!
Who's the King of Kings? pic.twitter.com/ob5LQwyHbJ

Pakistan number one test team in the world pic.twitter.com/5lYZYjtCr3

WE ARE THE BEST IN THE WORLD!#ISLU congratulates #TeamMisbah on becoming the no.1 ranked Test team in the world pic.twitter.com/sSprlv4vNh