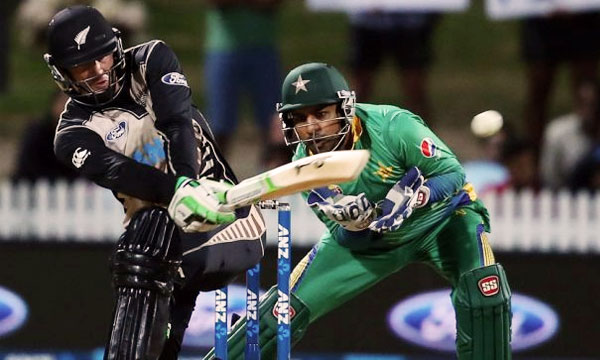 New Zealand beat Pakistan by 95 runs in the third and final Twenty20 in Wellington on Friday to wrap up the series 2-1. After being sent into bat, New Zealand made 196-5 with Corey Anderson not out 82. In reply, Pakistan were all out for 101 in the 17th over.

Sarfraz Ahmed made 41, while bowling for New Zealand Grant Elliott took three for seven and Adam Milne three for eight. Corey Anderson whacked a career-best 82 not out and followed up with two wickets as New Zealand demolished Pakistan by 95 runs in their deciding Twenty20 in Wellington on Friday.

New Zealand wrapped up the series 2-1 after being sent into bat and making an imposing 196 before rolling Pakistan for 101 in the 17th over.

The comprehensive victory marked the return of burly all-rounder Anderson to his best after he missed the first half of the New Zealand summer because of injury.

His man-of-the-match 82 off 42 deliveries was backed by Grant Elliott taking three for seven, Adam Milne three for eight and his own two for 17 as Pakistan imploded.

Anderson’s lack of cricket was evident in a rocky start to his innings when he went to the crease with New Zealand at 62-2 after seven overs.

In the last five overs, he faced 19 deliveries and bludgeoned 46 runs with his innings including four sixes and six fours.

He then set about carving through the Pakistan top order capturing Ahmed Shehzad for eight and Shoaib Malik for 14 before leaving the field with cramp.

Sarfraz Ahmed (41) and Malik were the only Pakistan batsmen to reach double figures as Elliott and Milne proved too difficult to handle in the daunting run chase.

When Pakistan captain Shahid Afridi won the toss he opted to bowl first, quoting the history of Westpac Stadium where the six previous Twenty20 matches had all been won batting second and the highest score Twenty20 total at the ground was 163.

But statistics did not stop Martin Guptill and Williamson making another flying start putting on 57 in six overs.

When Afridi brought himself on he captured Guptill in his first over with the New Zealand opener having made 42 off 19 deliveries.

Colin Munro only faced three balls before he ran himself to bring Anderson to the crease and Pakistan’s hopes of salvaging the series disappeared.

Wahab Riaz was the most successful of the Pakistan bowlers with two for 43.

New Zealand and Pakistan play the first of three one-day internationals in Wellington on Monday.

New Zealand made 196-5 after being sent in to bat first in the deciding Twenty20 against Pakistan in Wellington on Friday.

Scoreboard after the New Zealand innings in the third and final Twenty20 against Pakistan in Wellington on Friday:

Pakistan won the toss and opted to bowl in the deciding Twenty20 match against New Zealand in Wellington on Friday.

“If you look at the history of this ground, batting second is more successful,” Pakistan captain Shahid Afridi said.

He said he was happy with the way his players were batting but felt the bowling needed improvement.

Pakistan won the first tie in the three-match series by 16 runs and New Zealand won the second by 10 wickets with Martin Guptill and Kane Williamson producing a Twenty20 world record partnership of 171.

New Zealand has made one change from that side with fast bowler Trent Boult returning in place of spinner Todd Astle.

Pak vs NZ 3rd T20I 2016 is being held today at 11.00 am in Wellington, New Zealand. Pakistan and NZ both won the first and second match in Aukland and Hamilton respectively. The series is a level with 1-1 currently.

According to the sources, the Pakistan is likely to try out a new change int their batting order today. Muhammad Rizwan may replace Sohaib Maqsood in playing XI who could be asked to sit on the bench.

New Zealand, on the other hand, is expected to maintain the playing XI for the final T20 match. Pakistani skipper Shahid Afridi while speaking to news after a practice session on Thursday, said that he wishes to make his career’s last match in New Zealand a memorable one. He has promised that he will show a tremendous all-rounder performance in today’s match.

Pakistan will be concluding its New Zealand trip on January 31st.The T20 series will be followed by a three-match ODI series.