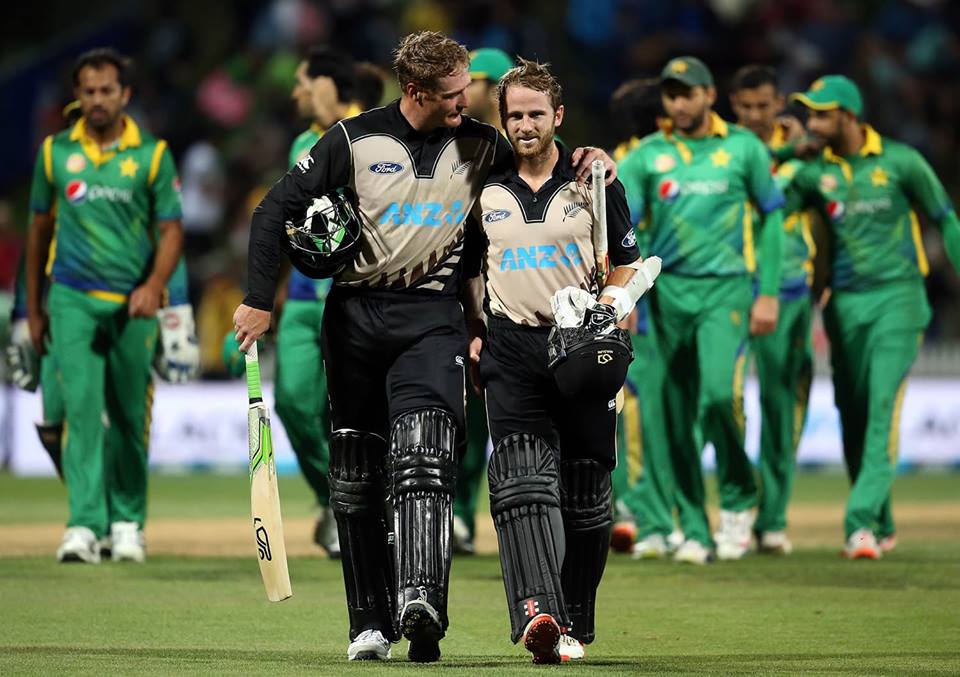 New Zealand beat Pakistan by 10 wickets with a world-record partnership by Martin Guptill and Kane Williamson in the second Twenty20 in Hamilton on Sunday.

Guptill was not out 87 and Williamson made 72 as New Zealand made 171 without loss in reply to Pakistan’s 168.

The previous world record for a Twenty20 partnership was 170 by South Africa’s Graeme Smith and Loots Bosman against England in 2009.

New Zealand has weighed up the impact of their record win over Pakistan in Sunday’s Twenty20 and concluded the benefits far outweigh the downside.

Martin Guptill and Kane Williamson’s unbroken 171-run stand to win the match and level the series set a new record for the highest Twenty20 partnership.

They eclipsed by one run the previous best of 170 set by South Africa’s Graeme Smith and Loots Bosman against England in 2009.

However, their dominance at the top of the New Zealand innings meant no time in the middle for anyone else in the batting line-up with only one match left before the world T20 championship starts in India in March.

Guptill said Monday that winning was better than making sure everyone had batting time. “You don’t really want to get out to give other people a go, do you?” he said.

Guptill scored an unbeaten 87 from 58 deliveries as New Zealand beat Pakistan by 10 wickets in Hamilton.

Pakistan won the opening match by 16 runs in Auckland, meaning the series is set for a decider in the third and final match in Wellington on Friday.

Against Sri Lanka in two Twenty20 wins earlier this month New Zealand lost four wickets in the first match and only one in the second, meaning limited opportunities for their middle order batsmen.

“It can only be good for us that we’re winning, not many wickets down,” Guptill said.

“Probably only three of us have had good long innings in the last three or for four games. It’s disappointing for the middle order but it can only be good for New Zealand cricket.”

New Zealand skipper Williamson, who scored 72 off 48 in partnership with Guptill, said the record was nice but winning was better.

“You can’t have everything,” he said. “It was a really good performance from the team all round.

“An improved bowling effort on a pretty good batting track first, and then for Gup and myself to put a big partnership together was pleasing.

“If you do things well then guys don’t get bats, but they’ll be preparing and training for the next game just as normal and I’m sure they’ll be ready to go.”

Pakistan spin bowling coach Mushtaq Ahmed said his bowlers were unable to find a way to break Guptill and Williamson who were only separated in the first match by a run-out.

“There was a good combination between Guptill and Williamson because they’ve got a different style of game,” he said.

“I think maybe from a coaching point of view we can develop more variation in our bowling, a bit more smart fielding positions. That’s the only thing.

“If you can get one or two wickets, then it’ll be a different ball game. It doesn’t matter if you get 180 or 200 runs on the board, if you don’t pick (up) wickets then the game will always be in the opposition hands.”