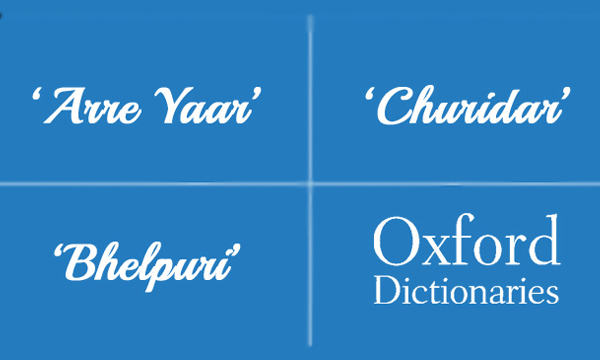 Now you can write ‘Arre Yaar’ let’s have some ‘Bhelpuri’ at the ‘Dhaba’ and watch girls in ‘Churidars’ without any fear of lost marks in your examinations. The desi phrase ‘Arre Yaar’ has now been added to the Oxford English Dictionary, along with ‘churidar’, ‘bhelpuri’ and ‘dhaba’.

The two words that can mean anything from ‘hey buddy’ to ‘you got to be kidding me’ in desi street lingo are among the new Indian words accepted by the Oxford English Dictionary.

What’s really surprising is that these words are not all that rare in English. ‘Arre’, for instance, has a quite a long history in English, with its first quotation dating back as far back as 1845.

“Our large and wide-ranging language research programme has found sufficient evidence that these words are being used in English for a reasonable amount of time and with reasonable frequency, and are of specific cultural, historical or linguistic significance.” said Dr Danica Salazar, consultant editor, Oxford English Dictionary, OUP.

Churidar was first spotted in English usage as early as 1880. It took 135 years to officially make it to the English language. The Oxford dictionary defines churidar as ‘tight trousers made with excess material at the bottom of the legs, which falls in folds around the ankles, traditionally worn by people from South Asia’.

Dhaba has been included as a noun and is explained as ‘In India or in Indian contexts: a roadside food stall or restaurant’.

In the updated version of English, Arre, which is to be used as an interjection in English, will ‘express a range of emotions and commands, especially annoyance, surprise, or interest, or to attract someone’s attention’.

Yaar has been defined as a noun to refer to a ‘familiar form of address: friend, mate’. According to the research, yaar was first spotted in English usage in 1963.

Bhelpuri’s debut was in 1950. Sixty-five years later, the word is defined as a noun to refer to an ‘Indian cookery: a dish or snack typically consisting of puffed rice, onions, potatoes, and spicy and sweet chutneys, sometimes served on a puri’.

Distinguished chair professor of Presidency University Swapan Kumar Chakravorty, “The inclusion of a word in a dictionary is dependent on its acceptance as a form of communication in English. If yaar is a word that has that kind of acceptance not just among those who speak in Hindustani but also those who speak and think in English, it should be included in the dictionary.”