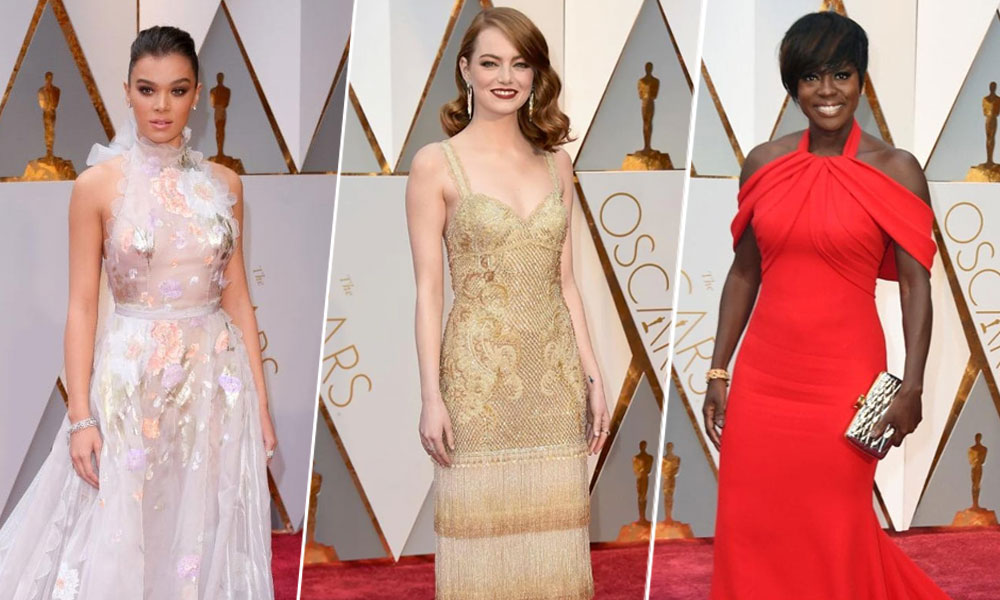 The starriest night of Hollywood, Oscars 2017 just wrapped up for the year and what an eventful night it was. La La Land took home 7 Academy Awards including Best Actress won by Emma Stone. Viola Davis gave a teary passionate speech and Mahershala Ali became the first Muslim to take home the coveted accolade.

While the grand gala acknowledged the old and the new for their performance, there is one question that is repeated quite often, ‘What celebrities rocked the red carpet?’ This year, the general feel of the red carpet was sheer fabrics and vintage cuts.

Here is a roundup of all our favorite looks from the Oscars 2017.

Starting off with the lady who makes a statement where ever she goes, Viola Davis seized the Oscar for Best  Supporting Actress for her role in ‘Fences’. Clad in a strawberry Armani Privé, the actress totally slayed the red carpet!

The best actress of the night was wearing a gold flapper-fringed Givenchy Haute Couture gown, complementing her fiery red hair. It seemed she stepped straight out of 80’s movie.

Can we just take a moment and appreciate how well Larson pulled of this black velvet Oscar de la Renta dress?  This could come under the riskiest dresses to adorn on the big night but the actress rocked the long slit and frill with class.

A pure white Stella McCartney cape dress with a Nirav Modi choker and a Roger Vivier clutch made Karlie stun on the red carpet.

@karliekloss is a style star #inourshoes at the 89th Academy Awards.

Dunst kept it minimal but managed to look glamorous at the same time. A classic black shoulder-less Dior dress with an asymmetric hemline was paired with a diamond necklace. Totally amazeballs!

The red carpet was a ruled by nudes and beige tones. Kidman in her Armani gown with bronze and gold embellishment seems to have topped the list.

Another one of the bold dresses included Steinfield’s Ralph and Russo’s flower embellished sheer gown. It was nothing short of regal.

#haileesteinfeld in #ralphandrusso 👍🏻or👎🏻? #tciredcarpet #oscars2017

If we had to describe Felicity’s look at the red carpet it would be: adorable! The Haute Couture Dior gown was a frilly number and the Rogue One actress looked super pretty.

Whether it was intentional or not, the actress’s  Zac Posen draped balloon gown was giving a strong ‘Belle from Beauty and the Beast’ feels.

What was your favorite look from the Oscars? Let us know in the comments below.