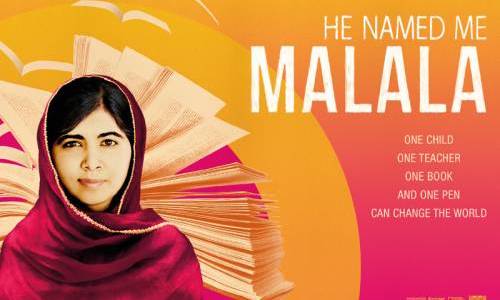 Hollywood’s documentary film “He Named Me Malala,” based on the real-life story of Pakistani activist Malala Yousafzai’s life and family in Central England has been tabbed in the Academy of Motion Pictures Arts and Sciences documentary shortlist. The documentary is amongst the top 15 shortlisted documentaries out of 124 submissions.

Read More: He Named Me Malala Documentary to be Released in Karachi Cinemas

The documentary “My Name is Malala” revolves around the plot of Malala and her family who has been living in  Central England since 2012, after the Taliban Attack.  The main plot of the documentary depicts the efforts of Malala as a social activist after the year 2012 in support for girl’s education and human rights. The documentary film is contrived under the banner of the American director /producer Davis Guggenheim, whereas the production of the documentary has been done by Imagination Abu Dhabi FZ (UAE) and Participant Media (USA).

On the other hand, 14 other documentaries, out of which some are claimed to be imaged on hot and controversial topics, have been shortlisted for the Academy Awards 2016.

Have a look at the shortlisted documentaries for the Academy Awards 2016:

The sources revealed that the final five nominees for the Documentary Feature Awards Category will be announced live with the rest 88th Academy Awards Nomination. The Award night will take place on Thursday, January 14, 2016, at 5:30 AM (PT) at the Academy’s Samuel Goldwyn Theater in Beverly Hills.

It is pertinent to know that Sharmeen Obaid-Chinoy, a Pakistani Journalist, and a filmmaker earlier won an Emmy Award and 2012 Academy Awards for the best documentary titled as ‘Saving Face.’