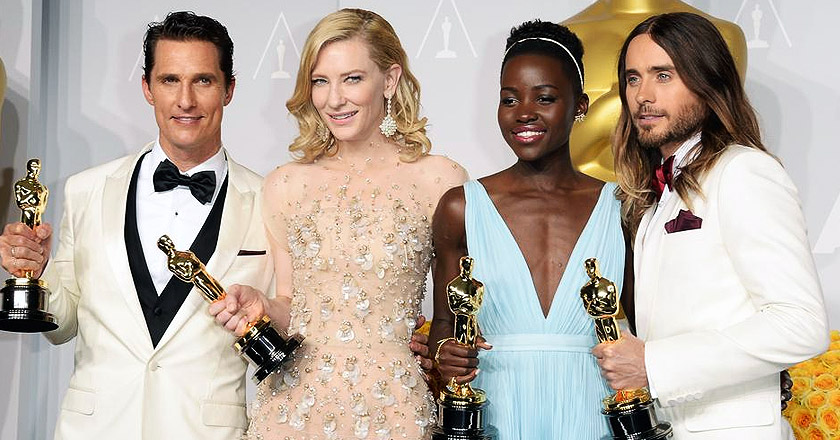 Oscars have always brought many memorable and delightful moments to cherish for both the Stars and for their fans as well. Without any further to do, let us share some of the most memorable Oscars with you

A peak at the above results and anyone could tell that Gravity ruled the Oscars, while 12 Years a Slave was chosen as the best picture. No doubt, it is one of the most memorable moments for Steve McQueen as his direction not only made it to the final nominees of Oscars but also brought home two great awards of Best Picture and Best Adapted Screenplay.

Moreover, the film’s actress Lupita Nyong’o won the best supporting actress Award which added another Oscar to “12 years a slave” winning streak. The actress delivered her compliments to the director by mentioning that,McQueen stimulated “everything with the breath of your own spirit.”

Gravity was the next big winner at the 86th Oscar’s 2014, bringing home 7 Oscars which also included the best direction award won by Alfonso Cuaron.

One of the most anticipated awards of the evening included the best actor award, which was won by Mathew McConaughey which left many shocked as Christian Bale, Bruce Dem, Chiwetel Ejiofor and as well as Leonardo de Caprio  who was one of the most expected of all, were left disheartened. McConaughey while getting too philosophical on his speech, commented,

On the other hand the best actress Oscar was won by none other than Cate Blanchett, for her role of frail socialite in a Woody Allen’s direction, “Blue Jasmine”.  The actresses role was howsoever very commendable and the award was somewhat expected. While receiving her Oscar, Cate said,

“As random and subjective as this award is, it means a great deal in a year of extraordinary performances by women.”

The evening not only dawned with all the celebrations but also offered memorial to 47 deceased stars including some of the famous names, like Phillip Hoffman, Paul Walker, James Gandolfini and Shirley Temple.

With all the celebrations and hassle during the evening, Ellen DeGeneres noticed the growling tummy’s of the Oscar stars and offered them free pizza, as a compensation to which she later asked for some donations from the crowd.