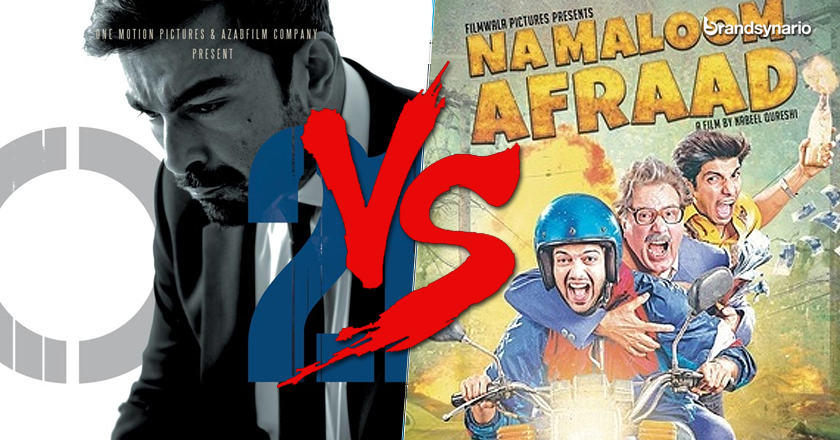 This year Pakistanis will be enjoying a five day long break from work and school with Eid-ul-Azha falling on Monday, right after the weekend. Phew!

When most of us are done with devouring scrumptious Bakra Eid treats, we would be out and about for more entertainment.

For movie lovers, this long weekend couldn’t have arrived at a better time! There are some excellent new movies on show this weekend, including Hrithik Roshan’s Bang Bang, Fawad Khan’s Khoobsoorat and Afia Nathaniel’s direction Dukhtar, with more new releases on Eid.

Last Eid, the Bollywood, Salman Khan starrer, Kick took over the cinemas and became the highest holiday grosser with an estimated earnings of a whooping Rs.240 million, breaking records for Waar and Dhoom 3.

This Eid, however, it will be Pakistani movies taking over the cinema. Two of the most awaited Pakistani movies, Na Maloom Afraad and Operation 021 are releasing on Monday, 6th October.

Na Maloom Afraad is a comedy movie, directed by Nabeel Qureshi, starring Fahad Mustafa, Jawed Sheikh and Mohsin Abbass Haider. The story revolves around these three main male characters, residing in Karachi and struggling to achieve their ambitions in the City of Lights.

A twist of event brings them together, followed by a hilarious string of incidents, where they come up with crazy ideas that could only work in Karachi, to save their lives, love and assets.

What makes the movie awesome is that it is not just a mindless entertainer like some recent Bollywood releases; it has a decent storyline and not just crude, vulgar jokes.

The movie is spiced up by Mehwish Hayat’s item song with eight more music numbers. There has been a lot of buzz around the movie and is expected to be the game changer for the Pakistani film industry.

In competition with this entertainer is the release of yet another Shaan high-intensity thriller, Operation 021. This action-spy thriller is a joint collaboration of Pakistani and foreign crew, with Zeba Bakhtiar and her son, Azaan Sami Khan on the production seat.

Directed by Summer Nicks, the movie has already created a lot of anticipation amongst Pakistani viewers through its trailers.

The movie is set in the remote areas of rural Pakistan and Shaan’s astounding performance is accompanied by that of veteran actors Aamina Sheikh, Shamoon Abbasi and Ayub Khooso.

The movie is said to be the first Pakistani movie to be released on the Dolby Atmos, the surround sound technology system of movies like Dhoom 3 and Kick.

The story of the movie is based on real life events, including NATO tank bombings in Afghanistan, with Shaan’s role as a spy agent.

Both movies seem to have excellent potential. However, Operation 021 can lead with the masses since it is a bilingual (English and Urdu) movie surrounding very serious issues.

Na Maloom Afraad, on the other hand, is an out and out desi comedy with issues that majority of Pakistanis can relate to in their everyday routines.

If you are planning a day with family, pick Na Maloom Afraad for some hilarious entertainment. For an action-packed weekend, Operation 021 would be a better bet.