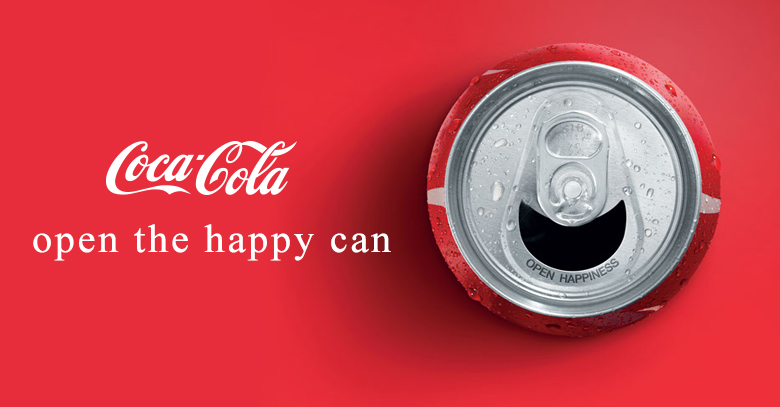 A slight change in a brand can often lead to serious repercussions as it is the familiarity with a brand that their loyal customers subconsciously find so recognizable.

However, Coca Cola has been experimenting (adding flavours and altering designs) on regular basis with the exception of their Logo Design for the last 127 years.

In the recent past, Coca Cola added new flavors and then altered their signature bottle contour. ‘New Coke’ couldn’t make an impression in 10 years of its business and Coca Cola Black hardly lasted two years in business.

It seems people like Coca Cola for its traditional look and taste.

Just when everyone thought, changing Coke can never be a good idea, McCann Milan made the slightest change in Coke cans and voila; every time a customer sees a Coke can he/she cannot help but smile.

These coke cans have a slightly redesigned mouth, so when anyone opens the can, it seems as if the can is smiling back. ‘The Happy Can’, as it is being called, compliments the ‘open happiness’ tagline of Coke, perfectly.

The adjustment is so subtle that loyal folks would not see anything to have changed at all, and when they do see it, all anyone can do is smile.

HAPPY CAN IN ITALY

The campaign is supposed to cheer up the Italians after a controversial year with their troubling economy, political turmoil and divisive religious upheaval.

Amidst all this, huge posters carrying a singly top down image of the smiling ‘happy cans’ with the words of ‘open happiness’ beneath, were placed in Rome and Milan. As speculators call it a mere opportune promotional campaign, we might as well call it a worthy effort at that, bringing a smile to anyone, for whatever reason, is still deemed worthy.

The can may not have potential to fix the problems of the 36% unemployed youth of the country, as critics claim, or the economical and political mayhem but it can give a fleeting smile, a momentary escape from those troubles.